A night in Australia 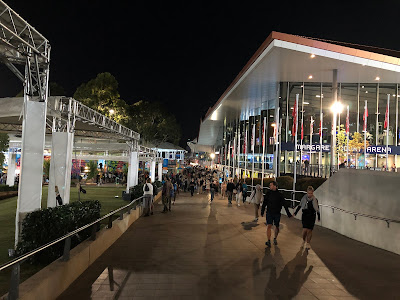 Hours into her scintillating third round Australian Open match with defending champion Naomi Osaka, Amanda Anisimova stepped to the baseline to serve to try to stay in the match. It had been a battle, a sword fight on a cliff’s edge, that mesmerizing mix of dancing and boxing that great tennis matches call to mind.

As the players trotted out onto the court, the crowd at Margaret Court Arena in Melbourne stood and clapped and cheered, voicing their appreciation for the effort and quality from Anisimova and Osaka.

Anisimova, looking down as players do before serving, smiled, savored the moment, then went to work.

Facing Osaka on a hardcourt at a major is a tall order. The Japanese star has won four major titles, all on hardcourts. But after winning last year’s Australian Open to begin the 2021 season, Osaka had a challenging year, with conflicts over post-match press conferences, public struggles with mental health, and a pressure-packed appearance in the Olympic tennis tournament.

But back in Australia, she was playing well, and talked about being in a better place in her media availability Down Under.

This was a mountain for Anisimova to climb. She had joined a long line of teenage tennis prodigies, making a run to the French Open semifinals in 2019, when she was 17. But tragedy struck later that year, when days before her 18th birthday her father, who was also her coach, died suddenly. She took a break from tennis, and the last few years have had mixed results on the tennis court while she processed the grief.

In Australia this year she has been working with Darren Cahill, a coach and ESPN analyst who has had great success with some Grand Slam champions. Anisimova won a tuneup tournament ahead of the Australian Open, and then won two matches to set up that clash with Osaka.

Out of the gate, Osaka was playing that level of tennis that makes one wonder how she ever loses, pounding serves with power and precision, seeming able to crush shots from the baseline endlessly, hunting lines with forehands and backhands, covering the court like a waterbug skimming on the surface.

Osaka broke Anisimova’s serve, then held the break the rest of the way to take the first set.

In the second, Anisimova dug in. She held serve to open the set. Then, with Osaka serving, Anisimova used some crisp winners and a double fault to create two break point chances. But with the calmness and certainty of James Bond saving the world while barely breaking a sweat, Osaka got out of the jam with some brilliant serving and held to 1-1.

Anisimova held to 2-1 and again attacked the Osaka serve. She again created a break chance; Osaka again slammed the door. The crowd was locked in to the duel. Anisimova created another break chance. This time, she worked her way in to the next and hit a brilliant backhand drop shot to win the point and get the break of serve to go up 3-1. The crowd roared, Anisimova pumped her fist, turned back toward the baseline, and smiled softly toward her corner, where her team was cheering. The announcer suggested that shot was something she and Cahill had been working on.

The rest of the set was like holding on in a gale-force wind, but Anisimova held on and served it out to win the second set, 6-3. The crowd roared, and the match was headed the distance, to a deciding third set.

That third set was remarkable tennis, shotmaking and daring risk-taking, a hot crowd under the lights at full throat, louder and louder as the stakes got higher and higher. Anisimova and Osaka battled into the Australian night, a dynamic tug of war, both steeling nerves to pound winners and doggedly hold serve.

As the set wore on, Anisimova served better and better. She held to 3-3 and then 4-4 without dropping a point in either service game.

Then came that game serving down 4-5 in the final set, where the crowd gave that standing ovation and Anisimova allowed herself a smile. It was a heartwarming moment in the midst of the heat of battle, a reminder that tennis is fun and the players are human. The beauty and brutality of singles tennis is the players are out there all alone, they have to problem solve and encourage themselves on the fly. But the crowd can be there for them. French player Gael Monfils says when he plays at Roland-Garros, the French Open, his home Grand Slam, he has wings. Buttoned-down Wimbledon can turn into a frenzy supporting their home country Brits or longtime favorite Roger Federer.

The crowd roared for both, and Osaka played beautiful tennis as well, and sounded afterward like she was far happier playing tennis than she had been. Anisimova seemed to ride the roars of the crowd and find the zone as they chanted her name.

A break in that serve game would’ve won the match for Osaka. She crafted two break point opportunities. Anisimova calmly saved both with some pinpoint shotmaking. She finally got the hold and the serve game with an ace, to make it 5-5.

Both held serve one more time, to 6-6, and it was a tiebreak to decide the match.

Watching spellbinding Australian Open tennis in dark, cold Missouri winter nights is quite a sensation, the world around me frigid and quiet and still, while before me is a bright portal to a world loud and intense and beautiful. For big matches on those dark nights, it’s almost like the house and I are hurtling through some great dimension, and the unfolding classic is the rapidly changing terrain, like when you go to IMAX movies and the screen is so big it feels like you’re in a box that’s flying through the air, gazing at wonders. 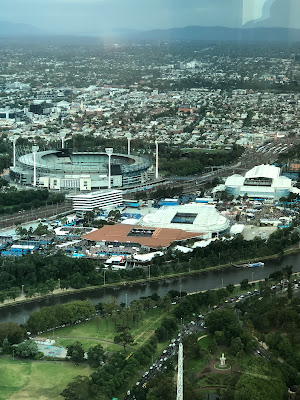 By the time the tiebreak hit, Anisimova was in full flight. Everyone watching was nervous as can be, but she was flawless, securing the early lead by winning a point off Osaka’s turn to serve, then winning her serve points as reliably as the pendulum swinging in time on a grandfather clock.

Her father had come to America for better opportunity, and had trained her to be a brilliant tennis player, and this felt like her destiny, battling one of the world’s great players on one of the sport’s great stages. Anisimova won that tiebreak, and clasped her hands over her face, and shared a nice moment at the net with Osaka. The crowd thundered in joy and appreciation.

Osaka talked last year about how much losing bothered her, how it made her feel worse than winning made her feel good. But after this match she sounded at peace.

“I fought for every point; I can’t be sad about that,” she said.

The match, even while putting fans at the edge of their seat and sending hands a wringing, had been one to savor.

Tennis is an ephemeral sport. Players can rise and fall so quickly. The four Grand Slam tournaments stand as ancient pillars anchoring the sport, but the cast shuffles endlessly. Serena Williams, Roger Federer, Rafael Nadal and Novak Djokovic have done a remarkable job elongating their careers, making it seem like time has stood still for them. But even they have more yesterdays than tomorrows in their careers, and tennis fans have felt a strong call to appreciate them as much as possible while they’re around. Only one of those four is playing in the Australian Open, and Nadal had more lines on his face and thinner hair than the swashbuckling kid who swept onto the scene more than 15 years ago. Tennis fans have to savor the moment.

Anisimova said she had done just that, how she loved high-pressure matches, and the passion and energy of the crowd.

“So I was just trying to enjoy every moment really,” she sold Christopher Clarey of the New York Times after. “I kept reminding myself, ‘I’m at a Grand Slam playing against Naomi Osaka, just try to enjoy it because it’ll be over soon.’”

Posted by Benjamin Herrold at 2:21 PM