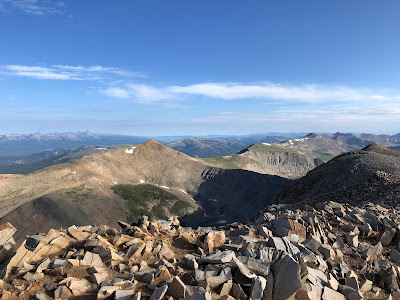 When I woke in the darkness early on the morning of July 21, I calculated the odds I’d have to fight a moose.

They were indeed remote, and my analytical mind used that to bolster my courage as I showered and got dressed for my hike up Mt. Sherman, a 14,043-foot mountain in Colorado. As I’d been reading reviews of the trail, a relatively simple 14er hike but still a physical challenge, one person had said he saw a moose near the trailhead the day before. Seeing wildlife is great, but I was reading about moose and how they are territorial and not afraid of humans, and I not-so-secretly hoped the walking portion of my day would not involve any moose sightings. I’d rapidly be above treeline, where a good sensible moose would have no cause to go, so any one I’d see would be near the trailhead and my vehicle.

I also figured any moose out there would be just minding their business, like me, and I read most instances of moose attacking people involved an unleashed dog. Those miscreants.

I turned off the highway south of Fairplay and, paradoxically, set out to drive 10 miles on Four Mile Creek Road.

The road gradually gets rougher, but my Chevy Equinox patiently climbed up and over the ruts and rocks, like a cartoon car walking rather than rolling on its wheels. As I drove and faint light gradually gathered, I listened to an AM radio station out of Denver. You seldom walk alone on Colorado hikes, and some other cars were making there way up the road to the trailhead as well.

Finally, past some historic old mining structures and after passing through a beautiful, pristine, high valley, I pulled off at a wide flat parking area to begin the hike.

The early stages of the hike involve winding up an old mining road. Much of the hike involves walking along mined area, shattered rock and ruined old mine buildings. In some ways it is not classically beautiful, not colorful, almost like walking on Mars. But there is still something special about jagged and foreboding areas, land that is unrepentant in its wildness.

The sky provided plenty of color flaring up in hues of orange, pink and yellow as another day began. The old mine buildings seemed to gaze from their rocky surroundings back down at the lovely valley below and the sunrise, as if they were sighing and thinking back to their glory days, when ambitious people buzzed about in search of fortunes, when those buildings played their part in producing staggering wealth. 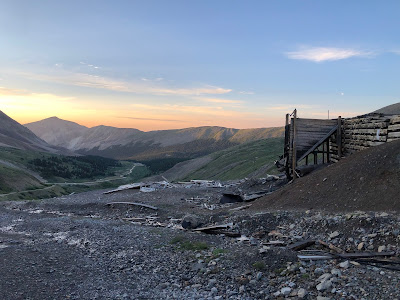 Eventually the trail turned right and worked up the mountain, seeming to follow a dozen different paths like a braided river as it meandered through and up a hillside that was less a traditional hillside and more an enormous pile of rocks, ranging from the size of a shoe to the size of a TV, and it felt like I was in another world where some giant had dumped them out for some future landscaping project.

That portion of the hike, performed with less-than-stellar efficiency as I made a few quasi-wrong turns but eventually got through, led me to the saddle to the left of the great rounded summit of Sherman, looming above as tough and imposing as its namesake, Gen. William Tecumseh Sherman. From here it was just up the should ridge, a long gradual climb to the top. 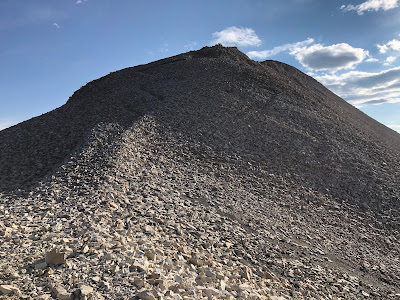 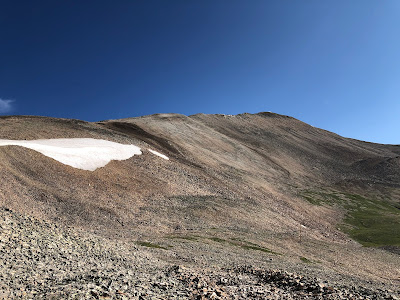 The sky was a deep, brilliant blue, Colorado blue, like the blue on the state’s flag. Mountain goats, rendered tiny to my eye by their distance, slowly worked up the slope to the left of the trail. On the way back down I'd get a closer look at a mountain goat family, relaxing on the slopes. 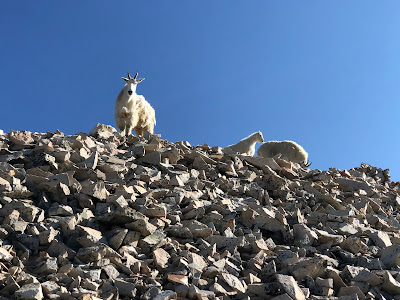 The climb up the ridge grew steep, and I began counting each time my right foot took a step, telling myself when I got to a thousand I’d have to be close to the top. The numbers accumulated slowly, like compound interest in the early stages. At some point, the trail seemed to be a like a road, slightly banked as it wound up the mountain. It seemed ludicrous there would be a road that high on the rocky terrain, that far from the last section of old road below. But this mountain had been extensively mined, so it was possible. Or perhaps the trail had just widened out over time.

Eventually the shoulder ridge of the mountain narrowed, and I passed through a rocky notch at the high point of the ridge, going from the right side of it to resume climbing up the left side of the ridge. The view opened up to the west, combining with my exertion in the thin air to be literally breathtaking.

As I got closer to the top, the rocky high point of the ridge immediately to my right ranged from waist high to head high, like a great shattered hand rail on the journey upward. That rock formation to the right was impossibly multifaceted, a thousand faces and surfaces, shaped by time and nature and physics, silently watching so many hikers and mountain goats go by through the ages, perhaps on this day wondering why this tall hiker in a Mizzou hoodie was eating so many fruit snacks. 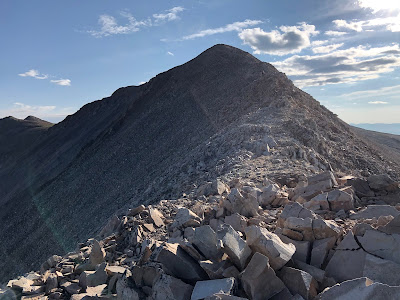 The last few minutes are the most beautiful. Tired but digging deep, like a tennis player deep in the final set, knowing the payoff is so close, I wove the final few zig zags up to the top. I wondered if each mini crest where I could see new terrain above would finally yield views of the summit. I knew I was minutes or even seconds away. At that point I knew I’d get to the top, we’d come so far, and I was dancing in the sky with the mountain.

It felt like entering some distant holy temple, those special rocks up above 14,000 feet, where every time someone had walked on them it had been a special moment for them, a last gateway to the summit of one of those storied Colorado mountains, the 14ers. It is difficult to find the words to describe this terrain leading the final few steps to the summit, which I know sounds absurd as I roar past 1,500 words on this, but all I can say is I felt so fortunate to be up there, and I took those steps lovingly, joyfully.

When I crested the great rocky flank of Mt. Sherman, gasping like someone who had just completed a stirring effort in a breath-holding contest, and walked onto the summit, I was taken aback, and not just by the staggering views of a good chunk of Colorado. It’s a good thing to retain your ability to be astonished.

It was my sixth 14er summit, and often they are jagged little gathering spots, perhaps the size of a decent living room, full of people and ripped by wind. But when I reached the top of Mt. Sherman on a gorgeous July morning, I found a wide, mostly flat ridge that seemed like a half-width football field, and only occasional murmurs of wind. There were a handful of people on the top, enough to ask someone to take my picture and have a backup if the first group said no, but not much more than that. 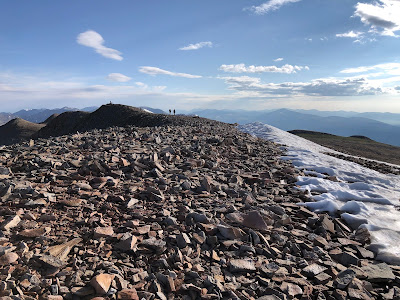 But the novelty of the summit situation and the pleasantness of not being ripped with wind like a climber approaching the summit of Everest quickly subsided in favor of the common feeling on top of a 14er… awe.

Being on top of a 14er, at least the modest amount I’ve been fortunate enough to climb, is like seeing old friends. Way off to the east where the sun was rising stood the faint but familiar outline of Pikes Peak, America’s Mountain, a monarch without nearby peers to obstruct it, visible from an equally staggering distance to travelers east of it. In the near foreground was the vast expanse of South Park and Fairplay, the quirky old mining town that was dwarfed by the sheer magnitude of space around it. 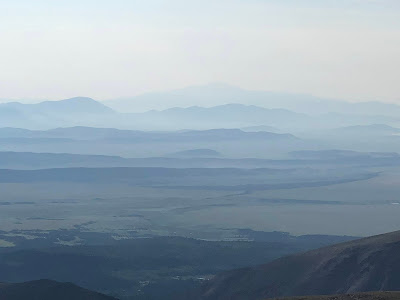 To the west lay the Arkansas River valley, where the infant river springs to life and begins its long journey to Little Rock and eventually the Mississippi River. Also visible in the valley was historic old Leadville, the highest incorporated city in the U.S., a town full of stories of rowdy days, of silver mines making people rich, of love stories with twists and turns. 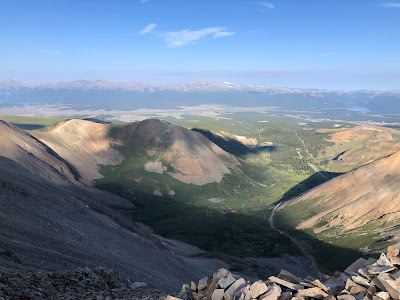 That valley separated the Mosquito range, where I stood panting, with the lofty Sawatch range to the West, the backbone of the Rockies, the highest mountains in the state. Distinctly visible were Mt. Elbert, the highest in the state and the first 14er I climbed, and Mt. Massive, the second highest in the state and climbed by my mom and her family 50 years ago. Peeking through a low spot in the Sawatch ridge stood impossibly distant and jagged mountains, perhaps the San Juans of southwest Colorado, where my family had spent so many happy weeks. 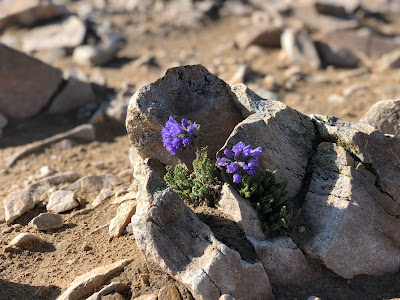 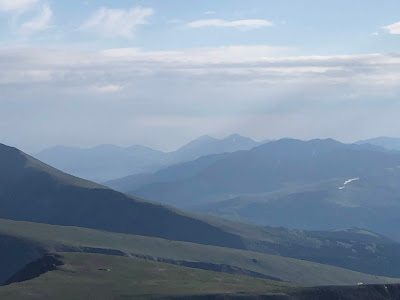 To the north stood the twin sentinels of Grays and Torreys peak, Grays more rounded and forgiving, Torreys jagged and harsh, reflecting the dual nature of people. They are the tallest mountains on the Continental Divide, where water has to make a binding decision on Atlantic or Pacific, and my friends and I climbed them in 2018.

I’d climbed Mt. Sherman alone, but I was surrounded by old friends. The mountains held their poker face as always, but on that beautiful sunny morning, I’m certain they smiled at me. 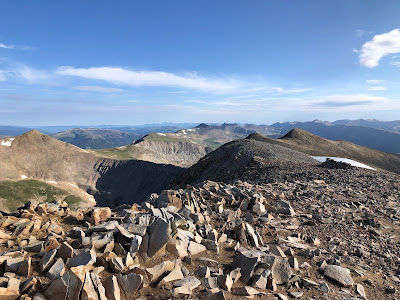 Posted by Benjamin Herrold at 3:17 PM No comments: