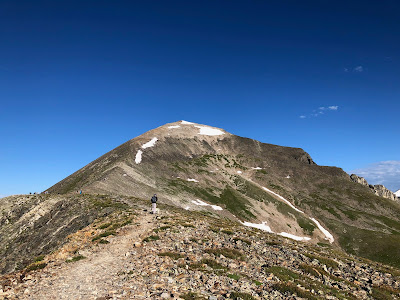 Going to Colorado feels like coming home for me. The “Welcome to Colorful Colorado” sings, the first view of mountains, the familiar views and roads all feel like they welcome me back again and again to a place where I belong, a wild and free place asking you to explore, as wild and free and unfettered as this ridiculous sentence.

It is “Chutes and Ladders” as a state, ridges and peaks rising higher and higher, elevation always on people’s minds, and creeks and rivers racing lower and lower, draining the state in a whitewater flurry. Some of my ancestors were born out there and lived out there. My family has taken vacations there for generations, and still there are more things to see and feel and explore.

I feel at home in Colorado. It can be a harsh and rugged place, but it is a place to heal, a place to learn, a place to relax and exercise and do both at once. Colorado fascinates me and makes me feel alive.

The sign at the bottom of the Quandary Peak trail gets right to the point, issuing its warning to hikers.
“There are no easy Fourteeners.”

You can say that again.

With its well-defined, Class 1 trail, Quandary is considered a relatively easy Fourteener, the reverent name used to refer to Colorado’s mountains over 14,000 feet, although “relatively” is a key word there. It’s also fairly close to Denver, and located near the popular tourist town of Breckenridge, so it’s a popular option as people’s first Fourteener to climb.

I did not expect it to be easy at all, and still the climb up Quandary was harder than I anticipated. It’s almost like a little healthy doubt, a feeling that you’ll need to give it your all and be ready to battle to meet the challenge, is the necessary mindset for climbing a Fourteener. Hours after passing by that sign and it’s blunt warning, I was gulping chestfuls of cold mountain air, legs aching, inching along, realizing there was indeed nothing easy about this hike.

Quandary Peak rises to 14,265 feet, the highest peak in the Tenmile Range of the Rocky Mountains. It resides in Summit County, which is comprised of high country in central Colorado. Almost all of Summit County is above 8,000 feet, with a lot of it considerably higher. My friends and I, here to climb Quandary, stayed in Breckenridge, which sits 9,600 feet above sea level. It’s a skiing town, but it’s also a popular spot in the summer, with plenty of shops and places to eat along its main drag.
It’s a pretty well-to-do area, and it's a popular bachelorette party destination, like Nashville but with altitude. It’s also known as a spring break option, like Cabo but with fresh powder.

My friends and I had a reasonable, restrained amount of fun in town the day before our climb. We started early, setting out from the parking lot at the base of the trail at 6:53 a.m.

After passing that ominous sign, which had other tips like being aware of changing weather conditions and carrying extra water, food and clothing, the trail climbed through trees. I was carrying approximately enough water to douse a decade’s worth of Super Bowl winning coaches, so I was good. I was sipping and sweating and wondering and we wound up the early stages of the trail, through an alpine forest.

As gradually happens when climbing a 14er, very gradually in my case, the trees begin to get smaller and thin out. At last, you get above timberline, leaving only rocks and dirt and sparse patches of tundra.

By this point, all doubt is removed that Colorado is our most beautiful state. Views swept out in all directions, high mountain valleys and lakes, rocks and lingering snow, masterpiece landscapes in every direction. Colorado is so beautiful it doesn’t have to worry about getting the right angles for Instagram posts.

We were now on the ridge, the long gradual backbone of the mountain that would take us to the top. You can see the summit area as soon as you get above timberline and on the ridge, but it’s pretty apparent the destination is still far away.

It was a gradual and steady climb, but plenty challenging, over infinite shattered rocks. Then came a flatter section to catch your breath and eat fruit snacks and Uncrustables, the official snack of rank amateur 14er climbers.

The final climb to the summit loomed in front of us. The rocky mass of Quandary Peak pierced the impossibly blue Colorado sky. It looked steep and long and daunting. 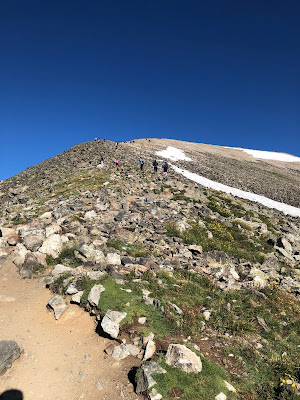 That last stretch was grueling as my friends and I inched closer to the top. I paused periodically to gasp cold and thin air for a few seconds, tell my friend Brenden to feel free to go around me anytime, anytime at all, then press on. It was a battle. I found my heart and will and just kept going.

Finally, finally, after all that hammering the metaphorical rock cracked, and the actual rocks crested a bit, and we were on a final flat stretch, only a matter of yards, leading up to the actual summit. The hard work of the climb was behind us, and there was the final, triumphant ceremonial steps, like walking up on the stage to accept your award. 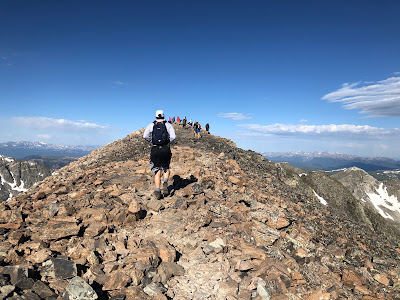 Quandary Peak is one heck of an award. Right around three hours after we set out, we were on top of the mountain. I swore the wind was coming at me from two directions, but periodically it was pause and it felt darn good up there. We took pictures, we ate, we savored.

Pikes Peak rose as a hazy bluish shape way back to the east, with the vast Great Plains beyond. We could now see west at the top, to seemingly countless summits and ridges. Like a movie with an A-list cast, so many of the state’s most famous peaks were visible. In addition to Pikes Peak to the east, the view west showed the familiar shapes of the state’s two highest mountains, Mt. Elbert and Mt. Massive, and many other peaks high up on Colorado’s elevation list. This was the mountaintop, our euphoria in the sky. 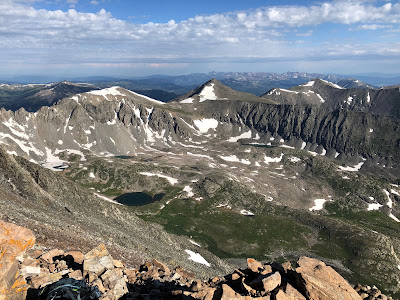 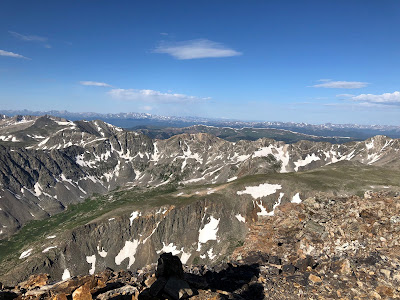 But then, like having to pay the bill after a great dinner, we had the hike back down. It was more gorgeous views, close views of mountains goats, and the relentless firing of the quads that comes with taking thousands of downhill steps in a row. 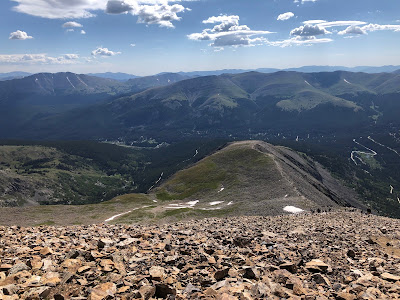 Just when it felt like I was getting blisters on my feet, we were down. We wanted to celebrate, but our bodies wanted to rest. After resting and Instagramming and getting dinner, I was still feeling a little less than my best, resolving to be in better shape for the next 14er climb.

But the Breckenridge condo where we were staying had a hot tub, and a good soak in it helped restore a good bit of my swagger. An evening in a hot tub in the mountains of Colorado is living life all the way up. I was where I needed to be.
Posted by Benjamin Herrold at 2:28 PM No comments: