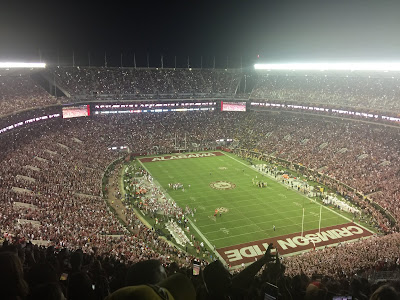 Ahead of the 2018 Mizzou football season, MU sent Drew Lock bobbleheads to season ticket buyers, and the bobbleheads bore a passing resemblance to the senior quarterback. It was the season of Lock and defensive lineman Terry Beckner, Jr., both of whom had come back for one more season. Lock was the offensive player from the Kansas City area, Beckner the defensive player from the St. Louis area.

The season began with high hopes, and a Sept. 1 home game with UT Martin. Missouri won 51-14, as expected, and the season was off and running. Missouri hosted Wyoming the next week, the only home evening kickoff of the whole season. It was a rainy day off and on, but conditions were pretty decent during the game and Missouri won 40-13.

The Tigers then traveled to Purdue on Sept. 15. The Mizzou-Purdue game in 2017 was awful, a Boilermaker beatdown of the Tigers. But Missouri played a lot better in the 2018 game, maybe actually tried, and won a wild, back-and-forth game, 40-37. The Tigers did give up an obscene amount of passing yards to Purdue’s backup quarterback, but they were 3-0.

Then came one of the biggest games of the year, as Missouri hosted No. 2 Georgia on Sept. 22. It was a huge opportunity, a chance to break through against the Bulldogs and grab the early lead in the SEC East race. But the Tigers couldn’t catch a break or avoid mistakes, with a fumble late in a play being returned for a touchdown, another missed kick that maybe actually was good, an interception bouncing off a Tiger receiver’s hands. It just wasn’t a clean effort, wasn’t near Missouri’s A game. To pull an upset like this, you generally need your A game and to catch some breaks, as opposed to a C game and having a few random breaks go against you. In any event, Georgia was the better team, and the Dawgs won 43-29. Georgia went on to the win the East, losing to Alabama in a dramatic SEC Championship Game.

Missouri then played at South Carolina after a bye week. The Tigers looked like the better team earlier, but the Gamecocks rallied. The game featured rapidly changing weather, downpours and sunshine on the same drives, before eventually seeing a lightning delay. After the delay, Missouri seemed like they might win when Tucker McCann bombed a long field goal, but South Carolina had time for the game-winning drive, and Missouri couldn’t stop them. The Gamecocks won 37-35.

Next up was an Oct. 13 game at No. 1 Alabama. It was a brutally tough game, with the Tide offense rolling under Tua Tagovailoa. But it was also a classic SEC experience, traveling down to Tuscaloosa to play a strong Alabama team. Nick Saban’s dynasty was rolling on. Missouri hung in the game early, but eventually the Crimson Tide defense stopped letting Missouri score, and the Bama offense kept adding touchdowns. The Tide won 39-10.

The big moment of the night was perhaps the return of “Dixieland Delight,” a song frequently played during Bama games, with the fans singing along and adding customized lyrics to the chorus. The university and hand-wringers in general didn’t like some of the lyrics (they weren’t singing “duck Auburn”), so they had quit playing it for awhile. But they brought it back that night, and the crowd stayed well into the blowout to sing along. Loudspeakers attempted to pipe in corrected, softened lyrics, but the joy at getting to sing along with the song was enormous, putting a jolt into the massive Bryant-Denny Stadium.

Missouri returned home for the Oct. 20 Homecoming game with Memphis. Both teams had strong offenses, but Missouri was better overall and notched a 65-33 win to stop the three-game losing streak.

Then came the most infamous game of the season, with Missouri hosting No. 12 Kentucky. The Wildcats were having a special season, winning 10 games. But their offense was sometimes suspect, and Missouri led 14-3 at the half.

But the Tiger offense was an embarrassment in the second half, failing to achieve a single first down during the entire half, all while leading, when burning some clock would have really helped the defense. Instead, eight - EIGHT! - three and outs. Of course, Kentucky kept having to punt right back at the Tigers, but finally, perhaps just by sheer volume of punts returned, Kentucky ran a punt back for a touchdown, and it was game on. The two-point try failed, so Kentucky still needed a touchdown. On the Wildcat’s final chance, their previously stagnant Kentucky offense drove 81 yards in 1:24 through the Tiger defense. But Missouri appeared to have a final frantic stop at the goal line, but an official called pass interference. There was some contact between the receiver and the Tiger defender, but it was a very controversial and disputed call as to whether it was enough for a penalty, and who even initiated the contact. But it was called, and of course then Kentucky scored a touchdown on the ensuing final play for a walkout 15-14 win.

Tiger fans were furious, both at the call and at the second half collapse when the game seemed in hand. Missouri was now 4-4.

But the Tigers embarked on another great November to end the season on a positive note. Missouri won 38-17 at No. 13 Florida, probably the biggest win of Barry Odom’s tenure so far. It was a huge win after a bitterly disappointing loss. Then came a survive-and-advance grinding win at home against Vanderbilt, 33-28, with the Commodores throwing into the end zone on the tense final play of the game.

Missouri got to play the CBS game of the week the next week, Nov. 17, and crushed Tennessee 50-17 in Neyland Stadium. Missouri then wrapped up the season with a Black Friday home game with sort-of rival Arkansas. The Razorbacks were bad, and the weather was awful, a cold driving rain, but Missouri played great, rolling to a dominating 38-0 win.

The Tigers finished the season with a Liberty Bowl appearance against Oklahoma State on New Year’s Eve in Memphis. Tiger fans had a great time on Beale Street, their first Liberty Bowl in 40 years. It was a wild game, a matchup of old Big Eight teams, with Missouri leading 16-14 at the half. Then the Cowboys dominated the third quarter, leading 35-19 heading to the fourth quarter. Missouri came roaring back, drawing within 35-33 before an OSU field goal made it 38-33. Then Lock and the Tigers had one last chance. They gradually moved down the field, perhaps trying to burn clock as well as score. But then, in Oklahoma State territory, on a fourth down, Lock ran with the ball but was stopped just short of the line to gain. His Mizzou career and the game and the season were over. Tiger fans at least had New Year’s Eve in Memphis to cheer them up.

It was another bowl loss to take some good feelings away from a strong finish to the regular season. But it was still back-to-back winning seasons, and with the arrival of transfer quarterback Kelly Bryant, Tiger fans had more reasons for excitement heading into 2019.

Posted by Benjamin Herrold at 5:54 AM