Mizzou 50: 2017 Tigers rallied from terrible start to make a bowl 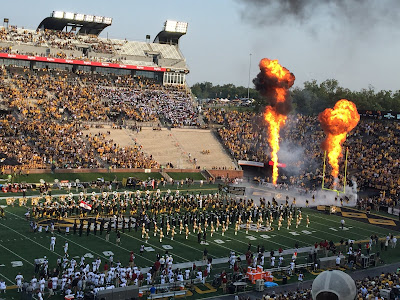 The first of those was an 11 a.m. kickoff with Missouri State on Sept. 2. It started out with disastrous defense, and a few boos were in the air when the Bears scored a touchdown to take a 35-34 lead. But the Tigers got ahold of themselves and won going away, 72-43.

The strength of schedule jumped up in week two, an evening kickoff against South Carolina. It was close for awhile, but the Gamecocks had Deebo Samuel, and Missouri did not. South Carolina won 31-13.

Then came one of the great debacles in recent memory, when Missouri hosted Purdue on Sept. 16. Purdue was getting things going quickly under first-year coach Jeff Brohm, but they were a 6-6 team during that regular season. And they flat out demolished Missouri at Faurot Field. The Boilermakers ran out to a 28-0 lead in the first half. Missouri seemed disinterested, or just utterly unable to match the competitive wrath of Purdue. An interception late in the first half allowed Missouri to feebly move the ball a little bit and take a field goal. The second half was played in front of vast swaths of empty metal bleachers. The student side, in direct sun, was completely vacant in many sections. But it was hard to blame anyone who left this disaster early. The final score was Purdue 35, Missouri 3, with the second half basically amounting to killing time.

Missouri was now 1-2 with No. 15 Auburn coming to town. It was a fun, full day of tailgating, with fans of both Tigers have a good time. But when the game started, the fun was all Auburn’s, as they won 51-14. 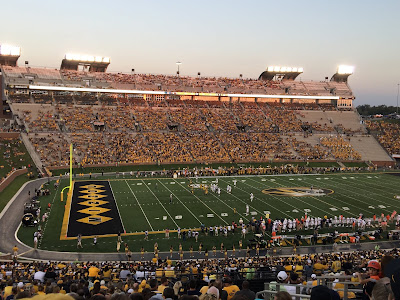 After the game, Missouri coach Barry Odom gave a fiery rant about how the program was a turnaround job, and that he was the man for the job, but it would take time. In hindsight, that was sort of the moment when Missouri started playing better, playing harder.

After a bye week, Missouri played at Kentucky on Oct. 7. It was a close game that turned into a shootout in Bluegrass country, with occasional rain drenching the proceedings. Kentucky won 40-34, with Missouri’s last drive falling short in part due to a Kentucky defender knocking the ball away, preventing the officials from spotting the ball in a timely manner, as precious seconds drifted away. It’s hard to say if that impacted the final outcome, although the SEC issued a statement saying officials missed the call. But it was a loss nonetheless, and Missouri was now 1-4 heading to a tough road game at No. 4 Georgia.

Missouri hung tough with the heavily favored Bulldogs, playing their best football of the season so far, and the game was tied at 21 in the second quarter. But then Georgia took charge, winning 53-28. The Dawgs would win the SEC title that year, win a riveting national semifinal in the Rose Bowl, but then lose the national title game in heartbreaking fashion to Alabama.

Missouri was 1-5 and the season was threatening to be a total disaster. It was Homecoming next, with Missouri hosting Idaho on Oct. 21. It had been a long time since Missouri had just one win heading into the Homecoming game. But the Tigers rolled to a 68-21 win over the Vandals, and the in-season turnaround was on. It came against some lesser teams, but wins of any kind were progress over the start of the season.

Missouri won 52-12 at UConn, the Tigers’ first road win in over two years. Missouri then beat Florida 45-16 in Columbia. The Gators were playing under an interim coach. Next up was a 50-17 demolition of Tennessee, which was getting close to firing head coach Butch Jones. The Tigers were now 5-5.

Then came a Nov. 18 trip to Vanderbilt. Missouri cruised to a 45-17 win in Nashville, locking up bowl eligibility for the first time since 2014. Missouri finished the regular season with an entertaining 48-45 win at Arkansas, another team about to fire its head coach.

The Tigers took a six-game winning streak into the Texas Bowl game with the Texas Longhorns, but Missouri kind of flopped in Houston, losing 33-16.

It was a tough end to an up-and-down, but ultimately successful season. Missouri had needed to get back to a bowl game, and they did. Junior quarterback Drew Lock had a marvelous statistical season, setting the SEC record for passing touchdowns in a season. He made the decision to return to Columbia for his senior season in 2018, giving Tiger fans cause for excitement heading into 2018.

Posted by Benjamin Herrold at 9:23 AM