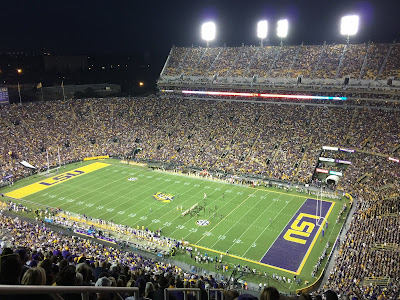 “You haven’t been to a college football game until you’ve been to Baton Rouge or Oxford, Mississippi.”

Tiger fans had chances to see games in Oxford, and all the incredible gameday revelry that goes with it, watching the Tigers beat the Rebels down there in 2007 and 2013. But the 2016 season provided their first chance to see Mizzou play in Baton Rouge, traveling to Death Valley, wondrous old Tiger Stadium, one of the great college football venues. It was an incredible experience, the next in a string of “Welcome to the SEC” moments that slowly unfurl over a decade because of the how infrequent trips to SEC West venues are.

The 2016 season was also the first chance to see Barry Odom as head coach. It was not a great season, although in hindsight it might have been a year of Odom learning to be a head coach and stabilizing things after the drama of 2015, as well as the program’s decline in 2015. MU alum Gary Barnett, a successful college coach, has said his first two or three years as a head coach he was mostly just figuring things out, saying “you don’t know what you don’t know” in the early stages.

The Odom era officially began Sept. 3 at West Virginia. Missouri’s offense struggled, as did the kicking game, and the Mountaineers won 26-11.

Missouri faced Eastern Michigan in the home opener on Sept. 10, playing with a frantic offensive pace and winning 61-21. Offensive coordinator Josh Heupel was starting to get the Tiger offense rolling.

The next week Missouri hosted No. 16 Georgia. It was a matchup of first year coaches replacing 15-year coaches, with Odom facing Kirby Smart. The Tigers took a lead, but couldn’t add to their lead and had some rapid offensive possessions that didn’t burn much clock, and Georgia came back, scoring the winning touchdown on a dramatic fourth down touchdown pass. Missouri had one last gasp, but a fumble by receiver J’Mon Moore, who had an otherwise great game, sealed the Tigers’ fate.

The next week was a general travesty, as Missouri hosted Delaware State, a game that shouldn’t have been scheduled. It was laughably not competitive, making one wonder what we were even doing there on a fine September afternoon. Missouri led 58-0 at the half, and Delaware State could do nothing on offense. The second half was shortened, and Missouri won 79-0. Alright then.

Missouri was 2-2 and headed to the Bayou to face LSU on Oct. 1. LSU had just fired Les Miles, and Ed Orgeron was the interim coach. It was a spectacular early October day in Baton Rouge. My friends and I got to attend an LSU tailgate, which was just as awesome as expected. The campus was scenic and there were people everywhere, having a good time, eating and sharing food, talking about the game and college football, just generally enjoying life.

The game itself was basically LSU hammering away on the ground, generously letting the clock run some between downs, gradually grinding down the Tiger defense. LSU led 21-0 at the half, and eventually won 42-7. But for Tiger fans, it was at least a gorgeous evening at one of college football’s cathedrals, with that eye of the Tiger painted at midfield, all the noise, the field where Billy Cannon ran for that epic punt return touchdown on Halloween night all those years ago.

Missouri did have one highlight, quarterback Drew Lock catching a touchdown pass to give Mizzou fans something to cheer, albeit in a lopsided game in the fourth quarter. Maybe in Missouri’s next visit to Death Valley, years from now, the program will be in better shape and make it a better game.
Missouri had a bye and then another trip to a vaunted SEC venue, facing No. 18 Florida in the Swamp. Florida won the game 40-14 and went on to win the SEC East that year.

Now 2-4, Missouri at least got a boost of good feelings with Homecoming week, facing Middle Tennessee on Oct. 22. In an incredibly long game, with two quick-tempo offenses and not much defense, Middle Tennessee won 51-45. Missouri was now 2-5.

There was a little hope Missouri could get things back on track the next week, hosting Kentucky, but the Wildcats ran out to a staggering 35-7 lead and won 35-21. It was a fairly embarrassing home loss, even if Kentucky was a decent team that year.

Finally, finally, on Nov. 12, Missouri won 26-17 over Vanderbilt at Faurot, the Tigers’ first win in seven weeks, and first win over an FBS team in over two months.

Missouri then lost a defense-optional game at Tennessee, 63-37, falling to 3-8.

The Tigers finished the season with the Battle Line Rivalry game with Arkansas, played on Nov. 25, Black Friday. Missouri fell behind early, trailing 24-7 at the half. But Missouri rallied in the second half, using a gutsy fake punt call by Odom along the way, scoring two touchdowns in the third quarter and one touchdown in the fourth quarter to win 28-24.

Missouri finished just 4-8, although the 2-6 SEC record was actually a game better than the 2015 team. With back-to-back losing seasons, and having failed to draw 60,000 fans for any game for the first time in 20 years, Missouri headed into 2017 needing to get back to a bowl and get some enthusiasm going for the program.

Posted by Benjamin Herrold at 3:15 PM