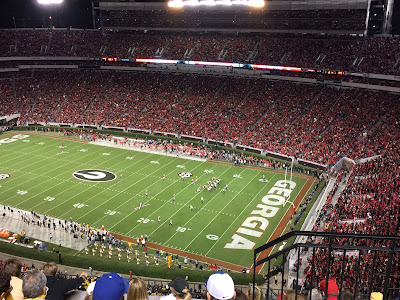 After winning the SEC East in 2013 and 2014, Missouri entered the 2015 with high hopes. The Tigers had found their stride in the SEC. But 2015 would be a volatile and ultimately unsuccessful season, and it would turn out to be Gary Pinkel’s last of 15 seasons as head coach.

The team’s participation in an on-campus protest is probably most people’s memory from the season, although don’t sleep on not one, but two 9-6 football games, basking in all their glory.

Missouri, ranked No. 24, started the season in straightforward fashion, winning 34-3 at home against Southeast Missouri State.

Then came a trip to Jonesboro to face Arkansas State, one of those quirky but usually fun Mizzou nonconference games at a team not from a power conference. Arkansas State was good that year, Sun Belt champions and unbeaten in conference play, but the game was cause for very mild concern, as Missouri struggled to put the Red Wolves away and had some stretches where the offense didn’t do much.

But the team came back home to face UConn on Sept. 19 with everyone still feeling pretty good. The game kicked at 11 a.m., and what followed was over three hours of intense struggle and offensive futility, culminating in a failed UConn fake field goal attempt late in the game and a 9-6 Missouri win. Tiger fans generally left the game wondering what the heck they’d just watched, with a side order of a solid sunburn for a lot of fans.

Missouri opened SEC play the next week, ranked No. 25 and traveling to Kentucky. The game was another offensive struggle, but Tiger fans understandably kept thinking Maty Mauk and the offense could get things going just in time and pull out a win, as the team had frequently done the year before. But 2015 was not 2014, not by a long shot, and Kentucky won 21-13.

That game was also Mauk’s last as a starter. He was suspended and eventually dismissed from the team for off-field behavior, meaning the Drew Lock era was on. Lock was a talented freshman from the Kansas City area, a local kid with a lot of potential. But he was still a freshman thrown into a starting role mid-season, and apparently having to lead a bad offense.

However, Lock and the Tigers got off to a great start winning 24-10 at home against South Carolina on Oct. 3. Tiger fans chanted “Locktober” after a touchdown. But it was a mirage. Missouri scored half of their SEC touchdowns in this one game. The Tigers scored three touchdowns against South Carolina, and then three in their seven other SEC games combined. In their six remaining SEC games, they would score two touchdowns. Oh, the humanity.

Now 4-1, Missouri hosted No. 11 in Florida on Oct. 10 for Homecoming. It was a big game, sort of a passing of the torch, the two-time defending East champion hosting the next rising power in the East, the team that would win the East in 2015 and 2016.

It was also the same day as a Cubs-Cardinals playoff game. It was a full day of tailgating in gorgeous October weather. There was a lot of energy in Columbia, and a crowd of over 70,000 people. Missouri has not had a crowd of even 60,000 since, and the current stadium capacity means this will be the last crowd over 70,000 at Faurot for a while.

Florida dominated, winning 21-3. Missouri’s offense could do almost nothing against the Gator defense. It was Will Grier’s last game with the Gators before being suspended for a banned supplement.

Missouri had fallen to 1-2 in SEC play, but they still had a big game the next week, at Georgia. Athens, Georgia, is a beautiful college town and a great spot to enjoy a football weekend. The Bulldogs were not great that year, and head coach Mark Richt was let go after the season, but they did win 10 games, and trying to win in Athens wouldn’t be easy. It turns out nothing would be easy on the offensive side of the ball. At the start of the game, Missouri picked off a pass, and it immediately felt like the defender had to get into the end zone. Instead, he was tackled at the 1-yard line, and Missouri had a bumbling sequence and had to settle for a field goal.

Missouri led 3-0 after the first quarter, and 6-3 at the half. But the Tigers couldn’t score at all in the second half, and Georgia gradually meandered toward the lead with a third-quarter field goal and a fourth-quarter field goal. The Tiger defense dug in again and again, but the margin for error was too narrow with that kind of offense. The Dawgs won 9-6, the second game of that score in Missouri’s offensively bankrupt season.

But as bad as things were, they can always get worse. Missouri traveled to Vanderbilt the next week, Oct. 24, and played one of the worst and ugliest games they’ve had. It was a rainy day in Nashville for this offensive atrocity. Vanderbilt led 7-3 at the half, and then tacked on a late field goal for a 10-3 win.

The next week, Halloween, was a bye week, giving Tigers a chance to take in a grand Saturday of sports, including Chris Fowler pulling a Halloween prank to briefly terrify Kirk Herbstreit in the Saturday Night Football broadcast booth, and the Kansas City Royals winning Game 4 of the World Series against the Mets, moving within a game of the title. The Royals won the World Series the next night, Sunday night, with a fitting wild comeback, and for the first time in 30 years MU student Royals fans had a World Series title to celebrate.

After the bye, Missouri returned home for a Thursday night game against No. 24 Mississippi State and quarterback Dak Prescott. It was a deluge, with one Tiger fan walking to the stadium with a large flotation device, presumably to be prepared. Missouri did get their first touchdown in over a month, but they lost, 31-13. The defense finally cracked somewhat, after fighting against almost impossible odds, trying to support an offense that couldn’t score. The Tigers were now 4-5. 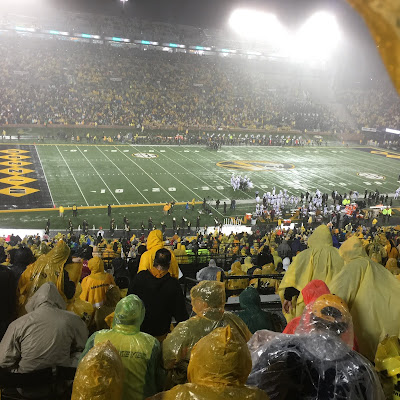 Missouri didn’t have a game that Saturday, but the Tigers were still in the news. Several players expressed solidarity with an ongoing hunger strike as part of demonstrations about race relations on campus. The hunger striker wanted the University of Missouri system president to resign. The players said they were not going to play in their next game, against BYU in Kansas City, unless the demands were met. Pinkel said he supported his players and the stance they had taken.

This caused a few days of intense discussion and opinions and division and calls for unity. In the end, the system president stepped down, the Mizzou players said they would play against BYU on Nov. 14, and then that week Pinkel announced he was battling lymphoma and he would retire at the end of the season to focus on his treatment.

The affects were felt in subsequent years, with the state legislature cutting funding to Mizzou, enrollment declining for a while before bouncing back, and budget pressure at the university. Missouri also saw lower attendance, having still not gotten back to 60,000 fans for a game, although some of that can be tied to wider attendance trends in the sport and some losing seasons by the Tigers. Even with the bowl years in 2017 and 2018, Missouri still hasn’t had one of those great seasons that brings people back on the bandwagon.

In any event, the Tigers headed to Arrowhead Stadium in Kansas City to play BYU, a game that was initially supposed to be a “Whiteout.”

BYU was decent, but Missouri found enough offense and won 20-16. Pinkel danced in the locker room in celebration.

Missouri returned home for a Nov. 21 game with Tennessee, Pinkel’s last game at Memorial Stadium. It was also Pinkel’s coldest game in Columbia, with a dusting of snow that morning. After 15 long years, mostly successful, it was a chance to say goodbye and think about all those memories and fun Saturdays at Faurot.

Tennessee had suffered some brutally close losses that season, but they were a good team, and they churned out a 19-8 win. Despite the loss, Tiger players carried Pinkel off the field as he left it for the last time as a head coach at a game. Pinkel is a fierce competitor, and he looked glum as he was carried off, outwardly appearing more focused on the loss he just suffered and the tough season rather than soaking in the moment. On the same day in Blacksburg, Virginia, Frank Beamer lost his last home game, also to fall to 5-6, but he smiled and waved at the fans. But Pinkel just wasn’t wired that way. In any event, the Columbia portion of the decade and a half journey was over. 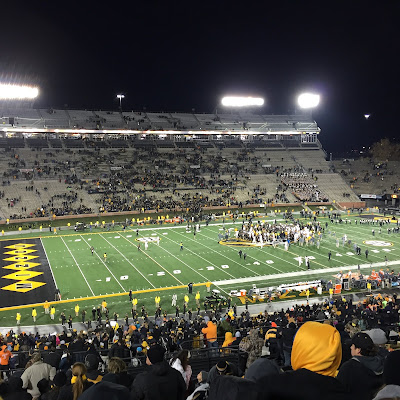 The season ended on Black Friday, Nov. 27, at Arkansas in the “Battle Line Rivalry.” It was an incredibly rainy weekend in Fayetteville, just a cold and constant and driving rain, rain soaking the Ozark hills that range out beautifully from Donald W. Reynolds Stadium. Missouri could barely score, again, and the Razorbacks gradually crushed the Tigers. I was there with some friends, and it was kind of brutal to watch, uncomfortable conditions, a bad game, your team losing to fall to 5-7 and miss out on a bowl. It felt like Pinkel deserved a better goodbye. He won more games than any coach in Missouri history, and it ended with a hopeless 28-3 loss in the rain in Fayetteville. But Tiger fans have plenty of great memories from the Pinkel years, and no matter what happened in 2015, he pushed the program to great heights, and he made Saturdays in Columbia matter again. 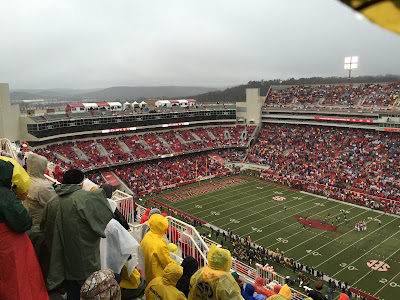 After the season, defensive coordinator Barry Odom, a Mizzou alum, was named the new head coach. Heading into 2016, the Tigers would open a new era.

Posted by Benjamin Herrold at 2:30 PM