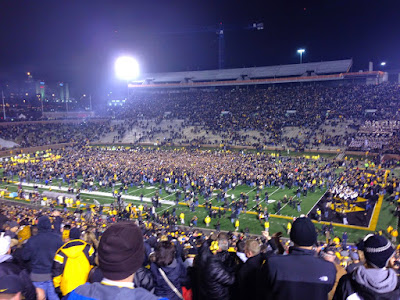 Sometimes in college football, special seasons, the kind you remember for generations, are something you see coming, a result you see teams building to for years and then the payoff comes. And sometimes they are wonderfully unexpected, like when Missouri randomly gets a warm day in February or a cooler day in the summer, just a gift that becomes even more special because it was not anticipated. Missouri’s 2013 season was one of these times, and it’s a season Tiger fans will remember for a long time.

Missouri had a losing record in 2012, and there was a narrative, especially among self-assured SEC types, that the Tigers couldn’t contend in the challenging conference, the deepest and strongest in college football.

But heading into 2013, the thoughts were just whether the Tigers could make it back to a bowl. Talk of division titles or conference championships were for later.

Missouri started with a 58-14 home win over a feisty Murray State team on Aug. 1. Missouri backed it up with a 38-23 home win over Toledo, and then after a bye week the Tigers headed to Indiana for their Sept. 21 game with the Hoosiers. It was a slightly tougher test, a road game, and it felt like it could be a close game.

Instead, Missouri rolled to a commanding 45-28 win to improve to 3-0. After a 41-19 home win over Arkansas State, the Tigers headed into conference play at 4-0.

Missouri began SEC action with an Oct. 5 trip to Vanderbilt. It was another uncertain road trip, another week of wondering if this was where things came back to earth a bit for the Tigers. Instead, it was another commanding win, 51-28 over the Commodores. Tiger fans were starting to wonder if this could be a really good season.

But things got tougher the next week. Missouri, now ranked No. 25, traveled to Athens to take on No. 7 Georgia. It was the year after Georgia’s imposing “old man football” win in Columbia. The Bulldogs had won the SEC East in 2012, and nearly beat Alabama in the SEC title game.

Missouri announced themselves as SEC East contenders on that glorious afternoon in Athens, Oct. 12. The Tigers took an early lead. Then, as Georgia was making a push in the second half, Missouri quarterback James Franklin was injured. Maty Mauk stepped in. And then, in a play that will live on in the memory of many Tiger fans, receiver Bud Sasser threw a touchdown pass on a trick play, which powered Missouri to finish strong and pull the upset, 41-26. It remains Missouri’s only win over Georgia in the teams’ seven SEC meetings, and it was Gary Pinkel’s only top-10 road win, an admittedly rare and difficult feat.

Suddenly, Missouri was an SEC and national title contender. There was a week of intense hype leading up to No. 14 Missouri’s Oct. 19 home game with No. 22 Florida. It was a morning kickoff, but the crowd was loud, and the Tigers cruised to a 36-17 win. In the second half, Tiger fans across Memorial Stadium did the Gator Chomp as the speakers played “We Will Rock You.”

Missouri was now 7-0 and ranked No. 5. Another week of hype and excitement, even more this time. It’s hard to beat a week of autumn anticipation as a college football team is playing well.

It was extra big since it was Homecoming as the Tigers hosted No. 20 South Carolina on Oct. 26. It was a night game, played at the same time as the Cardinals and Red Sox were playing a World Series game.

Missouri gradually built a 17-0 lead, including on a 96-yard touchdown pass from Mauk to L’Damian Washington that launched the Faurot Field crowd into delirium. When things are going well, Missouri fans often wait for things to turn, but it was starting to look like the night was going according to plan. The party in Columbia might last all night.

But South Carolina coach Steve Spurrier put Connor Shaw back in the game. Shaw had be held out of the game due to injury, but the Gamecocks decided to give him a chance. Shaw was at his competitive best, and the ol' ball coach Spurrier got on a heater calling plays, chipping away with screen passes. The lead melted gradually, then suddenly. 17-17. The game eventually went to overtime, with South Carolina converting a must-score situation on fourth down in the south end zone, quieting Memorial Stadium and giving Gamecock fans a chance to erupt.

Then, with South Carolina up 27-24 in the second overtime, Missouri lined up for a short Andrew Baggett field goal attempt at the north end zone to force a third overtime. The kick drilled the left upright and missed, drawing a collective gasp from the crowd. Ballgame. South Carolina had pulled the upset. Tiger fans left the stadium in stunned silence.

Missouri was ranked No. 10 and still controlled its destiny for the SEC East, needing to win its last four games to win the division.

Missouri started that final push with a 31-3 win over Tennessee on Nov. 2 in Columbia. Then came a fairly straightforward 48-17 win at Kentucky.

Missouri was now ranked No. 8 and traveled to No. 24 Ole Miss. A lot of Tiger fans made the trip, enjoying the spectacular college town of Oxford and taking in the tailgating scene at the Grove. Missouri was at their grinding and efficient best that night, shutting down the Ole Miss offense and picking their spots on offense. The Tigers won 24-10, closing out the last eight minutes of the game with a glorious ground-based attack that bled the remaining clock.

The stakes were set for the regular season finale, on Nov. 30 in Columbia against No. 19 Texas A&M. If Missouri won, they were headed to Atlanta for the 2013 SEC Championship Game. If they lost, South Carolina would represent the East in that game.

The SEC West opponent was still to be determined, with No. 1 Alabama playing at Auburn in the Iron Bowl to determine the West champ. Bama was on an incredible roll, having won the 2011 and 2012 national titles, and unbeaten in 2013. They seemed unstoppable. But Auburn was really good, and the Tigers were starting to feel like they had destiny on their side, beating Georgia two weeks before on a ridiculous tipped pass touchdown that caused Auburn radio announcer Rod Bramlett to yell, “A miracle at Jordan-Hare! A miracle at Jordan-Hare!” over and over.

Alabama missed some field goals early, seeming to be the better team but unable to cash in fully on their scoring chances and decent drives. I was watching on my phone in the stands at Memorial Stadium, but as Missouri’s kickoff time approached, the growing crowd got to be too much for the phone signal to handle, and the feed cut out for good.

Later, texts came rolling in from a friend of mine, excitedly telling me about what I would later learn was the Kick Six, maybe the greatest finish in college football history, when Alabama tried a long field goal in a tie game at the end of regulation only to have Auburn’s Chris Davis catch the miss in the back of the end zone and return it 109 yards for a touchdown as the crowd went wild and Jordan-Hare seemed to be shaking. Auburn had won the SEC West.

No. 5 Missouri was locked in a battle under the lights with No. 19 Texas A&M and Johnny Manziel. Then, in the fourth quarter, with the game tied 21-21 and the crowd on edge and then some, Missouri running back Henry Josey burst through the line, into the clear, and into the end zone, putting the Tigers up 28-21 with a few minutes left. It was a special moment on the field where Josey had suffered a brutal knee injury two years before.

The Tiger defense held, and Missouri won the game and the SEC East. The black-clad crowd rushed out onto the field. Fireworks exploded above the stadium. “Georgia On My Mind” drifted from the loudspeakers. Missouri, in just their second SEC season, was headed to the SEC Championship Game.

Missouri was still ranked No. 5, and Auburn was ranked No. 3. The game was for the SEC title, and the loss by Ohio State in the Big Ten title game that night meant the winner of this game would play Florida State in the Rose Bowl for the national title, although no one knew that for sure during the game. But Michigan State was formidable, so even heading into the game everyone there knew it was a possibility.

Missouri had been 5-7 the year before; Auburn was 3-9. This was a surprising matchup for the conference championship, and both fan bases were jubilant to be in Atlanta. There were a lot more Auburn fans at the game, but there was a decent contingent of Missouri fans in a corner cheering their hearts out.

The game itself was electrifying and exhausting, with Auburn coach Gus Malzahn calling for plays at a frantic pace, and Auburn going crazy with their potent rushing attack. Missouri kept answering. Back and forth the game raged, each quarter taking an hour. There were five lead changes in the spellbinding first half, with Auburn leading 28-27 at the break.

Missouri took the lead with 5:35 to go in the third quarter on a pass from James Franklin to Marcus Murphy. The black-and-gold Tigers were up 34-31, and Missouri was within 20 minutes of its first conference championship in 44 years. This was monumental stuff.

But Auburn struck back, scoring a touchdown rapidly on a six-play drive, all runs. Missouri had a poorly-timed three-and-out, and then Auburn scored another touchdown, on five plays, again all runs.
The 2013 Missouri Tigers were fighters, and a Franklin touchdown run drew Missouri back within 45-42 heading into the fourth quarter.

But Auburn put it away with two Tre Mason rushing touchdowns in the fourth quarter, winning 59-42. Mason ran for over 300 yards in the game. Missouri simply couldn’t stop the Auburn ground game, as the blue-and-orange Tigers ran 74 times for 545 yards and seven touchdowns. Just incredible. The conference title drought lived on.

It was tough walking out of the Georgia Dome, seeing Auburn celebrate and the confetti fall from the ceiling, with Missouri having come so close only to be turned away again. But it had been a great season for the Tigers, and they’d just played a memorable game on a huge stage.

Missouri went to the Cotton Bowl, now played in the Dallas Cowboys’ massive AT&T Stadium in Arlington instead of the old Cotton Bowl stadium. The No. 9 Tigers faced No. 13 Oklahoma State, their old Big Eight foe. A late defensive touchdown sealed the game, and Missouri won 41-31. Josey was the offensive MVP, and linebacker Andrew Wilson was the defensive MVP.

The Tigers finished 12-2 and ranked No. 5, Pinkel’s second top-5 finish. Auburn lost the national title game to Florida State in a close one.

It didn’t end in a conference championship, but it was a remarkable season, and Missouri had showed they could compete in the SEC.

Posted by Benjamin Herrold at 12:39 PM