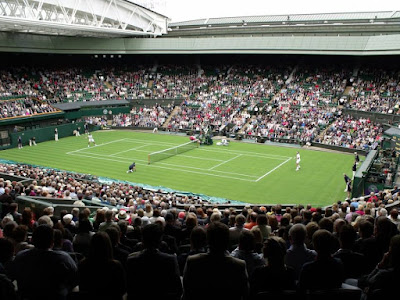 The first time I watched Rafael Nadal play Roger Federer in tennis was in the spring of 2005, which kind of seems like a few lifetimes ago. In the fading light of a Paris evening, Federer and Nadal were grappling toward the end of a tense French Open semifinal.

Federer, from Switzerland, was already the established and beloved champion, trying to fill out the career grand slam by winning the French. He was down two sets to one but digging deep, and the crowd was chanting his name to will him on… “RO-GER! (clap, clap, clap) RO-GER! (clap, clap, clap)” A few months previously, Roger had rallied from down two sets to none to beat Nadal in the Miami Open final, but it had been a grind.

The Spaniard Nadal was the precocious teenager, smashing high-bouncing forehands the seemed to hiss and dive and attack his opponent. He was perfectly suited for grinding clay-court tennis. Once, with Federer at the net, Nadal hammered shot after shot, which Federer kept stabbing back at him. “A shot in the dark,” announcer Mary Carillo said of Federer’s volley winner.

It’s kind of funny what you remember, that all these years later I remember sitting on the couch in my parents’ house, watching that, and the crowd chanting and the color of the clay and Federer at the net in the growing darkness and Carillo’s comment. Nadal went on to win, and take the first of his ridiculous 10 French Open titles.

More than a decade later, after several classic Federer-Nadal matches, I stayed up all night watching the two aging legends battle five riveting sets for the 2017 Australian Open title. I rooted desperately for Federer, like all Fed fans, unable to stand the thought of Roger losing another big match to him.
You see, in all those years of rivalry, Nadal probably became my top sports nemesis. I watched him with a mix of respect and fear, and it was always an event when Nadal was eliminated from a major.

For my friends who saw the animosity up close, it probably seemed fairly ridiculous how passionately I rooted against poor Rafa. I wanted him out of the way for Federer, and to not come near Federer’s records, especially the Holy Grail, most Grand Slam singles titles. It’s like I was a Bond villain, and the lineup of players Nadal faced in tournaments was my lineup of henchmen sent to take him out.

When news of a Nadal injury broke, my reaction was often George Costanza’s “restrained jubilation.”

It was a little over-the-top, especially since the two tennis greats seemed to genuinely like each other, even as they battled again and again for tennis’ biggest prizes. There’s video of the two trying to film a promo for a charity event and they slip into a prolonged giggle fit, an inability to keep a straight face that would make Jimmy Fallon proud.

But in some ways, I came by my disdain honestly. Nadal beat Federer five times at the French Open, four times in the final, including a lopsided straight sets final in 2008 that set the stage for an epic Wimbledon encounter. For years Nadal was the unbeatable roadblock to Federer winning the French Open; Roger finally prevailed in 2009 by beating Robin Soderling in the final after Soderling earlier took out Nadal in a shocking upset.

There were other moments, too. Nadal won in five sets against Federer in the 2009 Australian Open final, which reduced Roger to tears in his post-match address to the crowd. “God, it’s killing me,” Federer said. Nadal put his arm around Roger to console him.

Beyond the results, there was the style difference that deeply divided Federer and Nadal fans, even if in later years more and more of us might be appreciating the difference. Federer is art on a tennis court, a player who spurs the late David Foster Wallace to write brilliant pieces titled “Roger Federer as Religious Experience.” He seems to float and dart just above the court’s surface, hitting an insane variety of shots. He picks his spots to charge to the net with the calculating mind of a chess master. He whips one-handed backhands. Words like grace and elegance and genius are used to describe his game. He plays quickly and barely makes a peep during points. His early career ponytail notwithstanding, his fashion style is dignified, classic, almost aristocratic.

Nadal is power. So much power. He digs in at the baseline and bashes the ball until he wins a point. He is also grit and competitive fire and iron will, running down ball after ball, battling each point as though everything was on the line, saving a bajillion break points and jumping and pumping his fist and me shaking my head and wondering how he ever loses a tennis match. His game seems created to give Federer problems, hitting high lefty topspin forehands to Federer’s one-handed backhand, the ball bounced up way higher than the ideal strike zone for a one-handed backhand. Nadal hitting high and wide serves to Fed’s backhand is basically a tennis cliche at this point. Nadal plays so. Darn. Slowly. And he unleashes loud groans on about every shot. So loud. His fashion style is occasionally cutoff shirts to show his spectacular arms, and freaking long pirate pants… on Centre Court Wimbledon.

Ah yes, Centre Court Wimbledon. I’ve been stalling but we must tread here. Federer beat Nadal in the 2006 and 2007 Wimbledon finals, running his streak to five straight titles at the All-England Club. They met again in the 2008 final. Nadal was always the chaser, Federer the chased. Nadal had dominated on clay but had not yet won a major on another surface.

The ensuing match was an absolute classic, on the shortest list for greatest match ever. Played at tennis’ most hallowed venue, it was incredibly tense and gripping, the champion and the challenger, opposite equals doing battle, storm clouds brewing to add drama and cause rain delays, the last year without a roof on Centre Court to keep rain away.

Nadal won the first set, and then the second. Federer dug in, not going to give his kingdom up without a fight, winning the third set in a tiebreak. Then Federer took the fourth set in a tiebreak, saving a match point along the way on what he still calls one of the best points of his career. The crowd exploded with roars when the fourth set ended. The fifth set had another rain delay and the two legends battled into near darkness, with Nadal prevailing 9-7.

Federer would recover to win the U.S. Open later that year, but it was a devastating defeat. Fed mentioned it many times since then when citing examples of how tennis can be heartbreaking. He won Wimbledon the next year, in fact winning the tournament three times after that fateful 2008 final and winning eight Grand Slams so far since then. But it was still a tough tough loss. That loss alone would turn Fed fans against Nadal, let alone all the other big matches.

So how on earth did I grow to admire Nadal? Early in the fifth set of that 2017 Australian Open “dream final,” when Nadal was up a break and it looked like the match was following the usual Fed-Nadal script (great drama, very competitive, but Nadal grinds it out in the end), I was a bit distraught. But as the epic decisive set raged on, and Federer dug in and came roaring back, and Nadal battled back, I came to appreciate what I was watching.

“We are all fortunate to be watching this,” ESPN announcer Chris Fowler said.

Nadal had not won a major in three years, and Fed hadn’t in four and a half years. Their rivalry seemed to be reaching its end as far back as 2013. But here they were, battling deep into the night and into their careers, pouring it all out. I cheered deliriously for Federer, but even I could see an appreciate the incredible effort Nadal was putting into the match.

Federer won that night, countering Nadal’s advantage with fearless tactics, including stepping in closer to hammer Nadal’s shots before they could fully rise and be as lethal. It left little margin for error, but Fed’s aggression carried the day. He ripped backhands. That shot was finally not a liability against Rafa.

In the post-match speeches, Federer didn’t gloat at all, instead saying something beautiful that no doubt pushed myself and other Fed fans toward embracing Rafa. Federer spoke of last fall, when he visited Nadal’s tennis academy and they talked about wanting to play a charity match, but they were too injured to do that. They were wounded old lions dreaming of better days, dreaming of pushing back against relentless Father Time. And they had done so.

Then Federer said one more thing, he said he was happy to win, but he would’ve been happy to share the title with Nadal if that were possible. The mutual respect and admiration was obvious.

The two went on a reunion tour of sorts. Federer won Australia, Nadal won the French, Federer won Wimbledon, and Nadal won the U.S. Open, the only major where the two have never played. Nadal finished the year ranked No. 1; Federer was second.

Federer won all four meetings between the two in 2017, lifting his record against Nadal to a pretty respectable 15-23, including 13-10 away from Rafa’s clay. I’m sure the tide turning toward Federer helped my stance some, but it was bigger than that.

Adding to the thaw was the first ever Laver Cup, where Federer and Nadal competed together for Team Europe and even played doubles together, a surreal and fun sight.

So far in 2018, both have taken turns at No. 1. In January, again at Australia, I maybe came full circle on appreciating Rafa. He was struggling with an injury, but he kept fighting. He would win a grueling point and then pump his fist and talk to himself between points, chattering and muttering and willing himself onward, telling himself to keep fighting and keep chipping away.

He eventually hit the end, retiring while losing to Marin Cilic. When I saw pictures of him lying on the court in obvious pain, receiving treatment, I didn’t feel any restrained jubilation. I felt empathy for Nadal, for his body not being able to do what he fought so hard to will it to do.

After all these years, I knew he wasn’t a machine, like it had seemed at his most dominant points. He wasn’t a wall. He was a man; it was his vast human will that had pushed him on, even when fatigued or injured or both. His grit had led him to chase down ball after ball, to keep smashing shots fearlessly and counting on them to dive down inside the lines. There is simply no questioning the raging Spanish bull’s heart.

The beauty of the Federer-Nadal rivalry is that it keeps writing new chapters, even when it was a bestselling book a decade ago. I don’t know what twists and turns remain, and I’m sure I’ll find myself mildly rooting against Nadal if it could help Federer’s chances. But I’ve come to realize that Federer’s 20 Grand Slams and vast career accomplishments aren’t lessened by whatever Nadal does.

And most of all, for my favorite athlete of all time, I couldn’t ask for a more worthy rival.
Posted by Benjamin Herrold at 3:44 PM