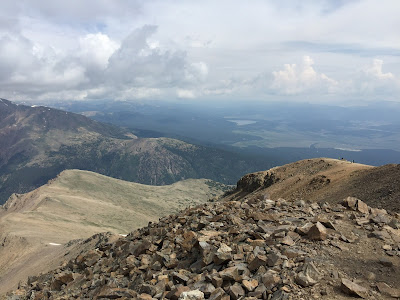 Zooming along the Top of the Rockies Byway last August, I recognized Mt. Elbert as soon as I saw it, a graceful and lofty pyramid rising on the horizon, looking like you’d handed a child a crayon and asked them to draw a mountain. I study Wikipedia the way men on a higher plane might study Shakespeare or a new language, so I knew the look and shape of the mountain from its well-worn Wiki entry.

Also dominating the view was Mt. Massive. The name is appropriate, and it appears even bigger than Elbert from the streets of Leadville. It’s only a dozen feet or so shorter than Elbert, and my mom tells the story of hiking Mt. Massive with her family on a vacation. They didn’t go all the way to the top, but they got so high a thunderstorm and rainbow passed by below them.

So yes, the view is breathtaking, including in the literal sense. If Denver is the Mile High City, Leadville is the two-mile high city. Aspen, where rich people romp, and Vail, where Gerald Ford schussed, are both high altitude skiing towns that are more than 2,000 feet lower than Leadville, situated more than 10,000 feet above sea level.

When I laid down to take a nap at our lovely Air BnB house at the edge of town, I folded my hands over my stomach, striking the pose of a great man lying in state. Before I could get into deep sleep, I found myself startled awake trying to draw a deep breath of thin air. After living most of my life below 1,000 feet, I found I was having to work to get deep enough breaths at the high altitude. The weight of my hands on my stomach was too much of an extra burden.

The thin air surely helped me soar to dunk on the decidedly-less-than-10-feet basketball hoop outside our rented home, and I drank water relentlessly to help ward off altitude sickness.

We had some time to explore Leadville as we tried to acclimate. It’s a quiet old town, but it wasn’t always that way. It was once the second-biggest city in Colorado, a booming mining town.
It was a wild and lawless town in the early days, full of mean men who were good with guns. Then the mayor had the brilliant idea to hire a guy who was even meaner and even better with guns to be the city marshal, and he generally restored order. The Tabor Opera House built by that mayor still stands on the main drag in Leadville.

If more modern ghost stories are your preference, check out the Delaware Hotel. It was creepy and creaky and full of weird old photographs and weird old people who looked alarmingly like the people in the photographs. The receptionist spoke good-naturedly of all the “entities” that were supposedly in the hotel, in the casual manner that I might talk about a round of golf.

We ate at the marvelous Tennessee Pass Cafe the night before our climb. I gamely attempted to go to bed early, even if my body was unsure with that foreign development.

We started our climb before 6 a.m., just as light gathered enough to see. Weighed down by five liters of Smart Water and some food in my backpack, walking at the back of our group and the only one without a significant other, it felt like if this were a horror movie I would be ripe for being the first one picked off.

It wasn’t a horror movie, but the climb proved to be plenty arduous. After a brief stint on the Continental Divide Trail, we turned left onto the South Mount Elbert Trail and climbed steeply. I breathlessly calculated how quickly I could chug water to lighten my load.

After a while the trail leveled off some to become a more steady, gradual climb. The trees thinned and we began to see spectacular views to mountains on the horizon and Twin Lakes and the Arkansas River valley far below. Eventually we got high enough we stopped seeing Aspen trees. And then we got high enough the evergreen trees ceased as well, there going the last option for places to relieve yourself in a dignified manner.

Periodically we would stop and rest and guess how high we’d made it. Other groups would do the same thing, and so we’d seesaw back and forth ahead of each other. One such group included Wisconsin Man, a presence wearing a Badgers sweatshirt and khaki shorts, climbing the peak as a Wisconsin Man would, with as little fuss and gear as possible. He didn’t have a pack at all, perhaps just a water bottle in hand.

As we climbed higher, in general the wind was blocked by the mountain itself, but at one spot some strong winds hit, and I started layering on clothes, cocooning myself in wind-resistant material.

But overall the weather cooperated, the wind was minimal, and the sun shone on us. The trail was less kind, turning and seeming to go straight up a wall. 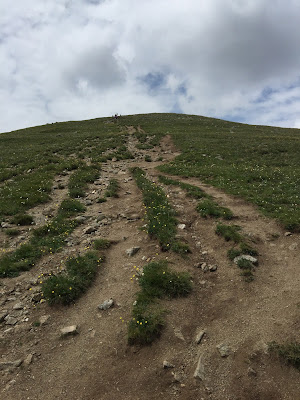 I metaphorically hit a wall as we churned upward. With my pack on my back, I was leaned forward, nearly on all fours, moving along with the drifting and gradual movements of an astronaut in space. At one point I gathered enough breath to tell my friend Nathan Yount I might be nearing my limit. His response was perfect, just a slight tilt of the head and raise of the eyebrows, and he kept inching forward. That was all the discussion I required, and I kept struggling upward, taking deep, frequent and unsatisfying breaths.

Eventually, mercifully, the extreme steepness yielded to a more gradual, back-and-forth climb, and my optimism grew. We kept at it with a deliberate pace and ample rest breaks.

Once, while resting on a grassy overlook, I was taking a picture of my friends Chase Ruble and Caleb Barron looking out at the spectacular view, when a large and friendly dog happened by. He walked over like an Alpine St. Bernard making a mountain rescue, but instead he lowered his head to inspect the contents of my backpack. Deciding he could do better than Smart Water, Uncrustables, fruit snacks (mostly empty wrappers) and Clif bars, he sauntered on. We would next see him at the summit, where he was the star of the show.

We moved on, but it was far more of a trudge than a saunter. Excelsior. Upward.

Like stores on Black Friday, the terrain above 14,000 feet is not a hospitable place for a human. But we could see the bright colors of people on the summit, and determination was the great rubber band stretched between us and that summit, drawing us closer.

Finally, we made the final steps over shattered rocks to the summit. My friends Seth and Oren Maberry, as brothers do, raced to be the first to set foot on the summit.

We made it, all six of us. The summit was a pretty good-sized area, and pretty well populated, as expected on a nice weather Saturday morning in early August.

The views were staggering in all directions. Mount Massive right next to Elbert. Leadville way down below in the valley. Towering “14er” peaks both near and far, distant ranges a hundred miles away, snow and valleys and lakes.

We took photos, sat together and ate some lunch. We had done it! 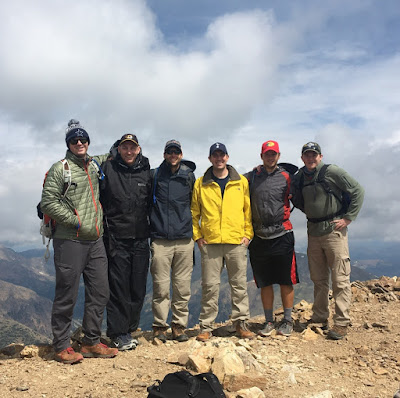 … Well, half of it. Next came the little matter of getting down the mountain and back to our car. We had more incredible views and a sense of accomplishment, but more than once I looked back up at the mountain and kind of wondered how we had done it.

Quads quivering, skin pinkening in the sun, and dust rising, we made it back down. 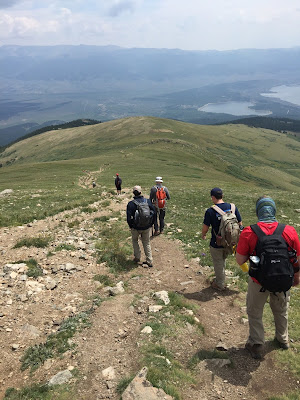 Back at our AirBnB, I toasted our efforts with a glass bottle of pop and housed about six Kings Hawaiian rolls, assuming I had racked up a lifetime carb deficit.

We put the party in climbing party and dined that night as conquering heroes, but also tired, humbled heroes. I had assumed it would be hard to climb the mountain, and it had been even more challenging than expected.

The squeeze had been harder than anticipated, but the juice had been sweeter. A good pair of Nikes, prayers, Uncrustables, the encouragement of great friends and general Midwestern stubbornness had lifted me onward, up to the top of the Rockies and to our little lunch spot in the sky. 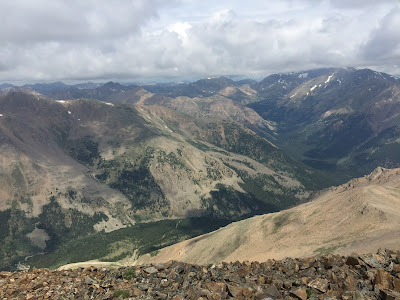 Posted by Benjamin Herrold at 2:51 PM