The night the Royals won the World Series 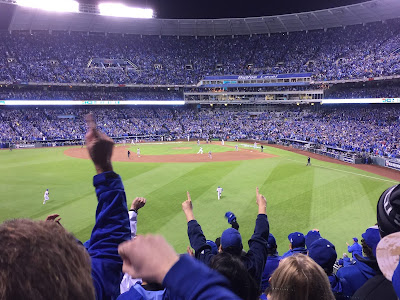 On Nov. 1, I settled in to watch the Royals try to win the World Series. I sat on a blue couch, wore a blue Royals shirt, and kept my blue Royals hat within arm’s reach. I had loved the Royals even though they were pretty awful for all my life, like you might love an ugly dog. But over the last 15 months they were a juggernaut. It was bizarre and wonderful. The Mets started Matt Harvey in Game 5, and he was cruising, hanging up zero after zero. The Mets led 2-0. Perhaps the series was going back to Kansas City.

It was August of 2005. I was about to embark on a major change in life, going off to college. The Royals lost 19 games in a row. I remember listening to a game in the upstairs of the house where I grew up, and Denny Matthews saying Chip Ambres had dropped a routine fly ball that would’ve ended the streak. It was all ridiculous.

Initially it appeared Mets manager Tony Collins would take Harvey out of the game after eight scoreless innings, but Harvey pretty much refused. Collins let him go back out. Leading off was Lorenzo Cain. The Royals offense hadn’t done much all night, but Cain churned out a walk, and then stole second. Hosmer then belted a double to left and Cain raced home. 2-1. The Royals had life.

It was September 30, 2014. Maybe the best game I’ve ever seen in person, the AL Wild Card game. Three times the Oakland A’s took the lead, and three times the Royals rallied, twice when they had to score a run or the season was over. The Royals won in 12 innings, near midnight, with Kauffman Stadium roaring. That launched a remarkable postseason run that didn’t end until the unyielding Madison Bumgarner shut the Royals down to win Game 7. It was epic theater to be there, but it was crushing. They’d been so close, and there were no guarantees they’d ever get there again.

After Hosmer’s hit, Mike Moustakas grounded out to first, moving Hosmer to third with one out. Salvador Perez hit a grounder to third. As soon as the Mets’ third basemen threw to first for the out, Hosmer charged home like a madman. It was an audacious move, and Lucas Duda’s throw home was wild and Hosmer slid in safely. My shouts could presumably be heard all over northwest Columbia. Tie game. Extra innings.

It was June 6, 2006. I was raking hay on my parents’ East Farm, listening to Sports Radio 810. It was the day of baseball’s draft, and the Royals had the first pick. They seemed to be a franchise that had reached its Armageddon. Operating without a general manager (Dayton Moore had been named but supposedly wasn’t involved in the draft), picking on 6-6-6, the Royals took Luke Hochevar, a pitcher who had thrown a year in independent ball the year before. He was historically bad as a starting pitcher, just abysmal. Still, he kept digging. The Royals tried him as a reliever in 2013, and he was terrific. But then he was injured for the season heading into 2014. A devastated Hochevar said he was sad he couldn’t be involved in the celebratory dogpile at the end of the season. I thought that was kind of a crazy thing to say. That fall, the Royals had a celebratory dogpile as American League champions. Only the Giants and Bumgarner kept it from being a World Series champions dogpile.

Luke Hochevar trotted out of the bullpen to pitch the 10th inning of a tied World Series game. He threw two scoreless, hitless innings. To the 12th inning the game went, still tied 2-2.

It was December 19, 2010. The Royals’ best pitcher, Zack Greinke, asked the team to trade him, basically because they were bad and he was tired of pitching for a constantly rebuilding team. He wanted to win. Among the four players the Royals got were shortstop Alcides Escobar and centerfielder Lorenzo Cain, starters in the 2014 and 2015 World Series. A Royals broadcaster once said he would be a special player, and I ranted to my friend Caleb Barron at a Royals game in early 2014 that he had been anything but a special player so far. Since then he has indeed been special.

It was November 1, 2015. The 12th inning of World Series Game 5 was full Royals. Perez singled. Jarrod Dyson, a 50th round pick, pinch ran. He stole second and then went to third on an Alex Gordon groundout. Then with Dyson at third and one out, Christian Colon, batting for the first time in about a month, lined a single to left with two strikes to put Kansas City ahead. The slow drip of the Royals offense continued. A Mets error. An Escobar double to make it 4-2. The versatile, incredible Ben Zobrist was intentionally walked. With the bases loaded, that special player, Lorenzo Cain, hammered a double to clear the bases. 7-2 Royals. Start the party. The overwhelming Wade Davis closed things out in the bottom of the 12th, and the Royals were World Series champions. Hochevar was the winning pitcher. I was on sensory overload, watching and listening to the FOX broadcast of the final outs while also listening on my phone to Denny Matthews and Ryan Lefebvre call it on the radio. I’d imagined the Royals winning the World Series many times through the years, but none of it prepared me for that moment when they actually did it. I was stunned, euphoric, and so proud of Kansas City and its Royals.

There were so many great memories from this championship season. They came flooding back that night, along with memories through my decades as a baseball fan. Going to my first game of 2015 with my mom and dad and sister. Going to a game with Caleb Barron before he moved to Arizona, a far cry from the awful game in 2012 the first time I dragged him to Kauffman Stadium. Going to a Royals-Cardinals game with my great Columbia friends, blue and red enjoying the game together. Watching the Royals win on a perfect spring day at Wrigley Field. All those nights listening to games on the radio or idly watching on TV, the air outside warm and heavy and sweet. My brother’s friend pounding the steering wheel of his cheap car when Dan Reichert gave up a devastating home run in some lost season. Turning double plays and catching fly balls out in the yard as largely forgotten Royals players from a largely forgotten team. Games at Kauffman Stadium from snow flurries to crushing heat and humidity. Postgame fireworks. Postgame ice cream with Kansas City girls we met. Sluggerrr starting rallies with the slow clap. Buck night hot dogs and taking your life into your hands. Hats and shirts gradually worn out. The desolation of that Game 7 loss, which Dayton Moore said “haunted him.” The incredible rally in Game 4 this year against the Astros, facing elimination, when I went on a text rant to Barron just before the Royals punched five straight singles to crawl back from the grave. Listening to Denny call the clinching of another pennant. Going to Game 2 of the World Series with my sister and brother and sister-in-law, when Cueto went the distance and the Royals poured it on, white and blue jerseys a blur on the basepaths, knocking the ball all over the park with two-strike hit after two-strike hit. And at last, November 1, 2015, the night the Royals won the World Series; a night and a season to cherish forever.
Posted by Benjamin Herrold at 4:01 PM