An Afternoon at Wrigley 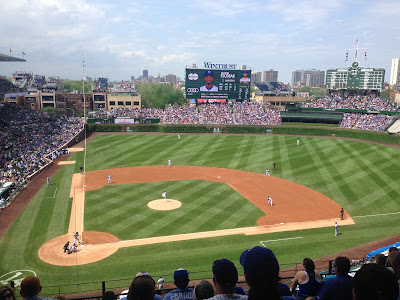 I gazed up at the iconic red marquee over the main entrance to Wrigley Field, one of those moments where you see something in person that you've seen in photographs a hundred times, and it's at the same time like a dream and also more real than real.

As I looked around for someone to take a picture of me and my sister, Abbie, with the sign, a tall Cubs fan asked if I would take a picture of him and his girlfriend with the sign. I said sure, and as he handed me his phone, he leaned in close and said, "I'm going to propose, could you take video?" As the voice in my head yelled, "Don't screw this up!" I filmed as he got down on one knee. She overflowed with joy, hand to mouth, then managed a "Yes!" Their friends and family poured out from the crowd and hugged and hugged.

Of all the places possible, the guy chose in front of this old ballpark to get engaged. Not many things in our 2015 day-to-day lives link us to 1914, but Wrigley Field does. It remains a gem, a national treasure, an outpouring of culture and history. I held high hopes for my visit to Wrigley, and on a warm, sunny late-May day, the ballpark still exceeded my expectations.

My first sight of 101-year-old Wrigley Field reminded me of seeing Wimbledon's Centre Court for the first time; you wander through a charming little neighborhood and then it just sort of arrives. The flag-lined upper tier of the stadium represented a definition of a grandstand, an old-time grandstand you might see at a dusty old county fair. My sister and I ate some lunch right across the street from Wrigley at the Cubby Bear. The Blues Brothers' version of "Sweet Home Chicago" poured from the speakers and a brief shower poured outside and I wondered what this place was like the night of Game 7 of the 2003 NLCS.

We walked a lap around the ballpark before going in, traversing the relatively narrow thoroughfares separating Wrigley from Wrigleyville, the collection of bars and apartments and rooftops and trees; a cocoon of daydreams and good times around the Friendly Confines. Outside of right field, workers laid brick as part of the ongoing renovations.

We went inside. I'm trying not to gush here, but it was a dream. We bought scorecards and strolled down the concourse to left field. I found the Steve Bartman seat and posed for a photo reaching over the railing for an imaginary foul ball, unable to resist recreating the bizarre scene from the 2003 NLCS Game 6. An imaginary enraged Moises Alou was unable to make the catch.

We navigated the ramps up to our seat, near the front of the upper deck on the infield. I was struck by how close the front of the upper deck was to the field. A portrait of baseball sprawled below; ivy on the brick wall, the green manual scoreboard in center, the bleachers where the party had already started, trees and rooftops of not-that-tall buildings peering over the bleachers, the very batter's box where the real live human Babe Ruth hit his epic "Called Shot" home run in the 1932 World Series, his 10th and final Series and his 15th and final World Series homer.

We bought concessions and gazed at the downtown Chicago skyline from an upper deck patio area.

My sister and I filled out our scorecards, pencils scratching names and positions on paper as they had for generations in this neighborhood of Chicago. The first number/name/position, "2 Escobar SS" led off in brilliant sunshine. With the wind blowing out, he smacked a homer into the left field bleachers. I stood and applauded.

For all the sights and sounds and smells, Wrigley remains relatively minimalist. The ads are understated. The massive new video boards are unavoidable, but they present information in an uncluttered, simplistic way, with a green background to match the outfield's dominant color. You have to look to find where the score is listed (on the small ribbon video board down the line, between the lower and upper decks).

An older Royals fan and his wife were seated to our right. He said that day was his 80th birthday and that he had been to the home ballparks of all 30 MLB teams. Wrigley was his among his favorites, along with Camden Yards in Baltimore. He added that before the game, at the Wrigley Field marquee, he ran into another Royals fan also celebrating a birthday, who happened to be starting leftfielder Alex Gordon's mom. In the second, Gordon belted an opposite field homer to left. 2-0 Royals.

A few scattered rain clouds rolled in during the third. The lights came on at Wrigley Field, recalling an old Statler Brothers song, "Don't Wait on Me." ("…When the lights come on at Wrigley Field, I'll be coming home to you!" It used to be code for never, but I guess a songwriter somewhere had an awkward, belated homecoming when the lights finally did come on in 1988.) As far as I could tell, there were only lights on top of the grandstand on the infield. Good luck, outfield.

The Cubs got a run in the third, but Royals pitcher Edinson Volquez then started reeling off strikeouts, nine total that day. Salvador Perez crushed a homer to put the Royals up 3-1, and a "Let's Go, Royals!" cheer rang out from among the massive Kansas City contingent at the game. A Cubs fan in the bleachers threw the home run ball back on the field, per tradition.

By the fifth, the sun was out in force, heat and humidity chased by cool breezes. I got a good rubber pencil going as I kept score. At one point, a fairly sharply hit foul ball zipped up toward us, but a dad two rows in front of us, hopped up, caught it with one hand, didn't spill his beer, and casually handed it to his daughter. The crowd cheered with approval.

The game had been ideal as a Royals fan, but in the sixth Wrigley showed it's feisty side. With Kansas City up 4-1 in the bottom of the fifth, facing a wilting Volquez, Jorge Soler jolted a two-run homer and the Cubs crowd. They roared with approval and that familiar, catchy song blared from the speakers…

Come on, baby don't you want to go,
Back to that same ol' place,
Sweet home, Chicago

In the seventh inning stretch, everyone belted out "Take Me Out to the Ballgame." In the bottom of the seventh, Addison Russell homered to tie the game. More "Sweet Home Chicago." Wrigley was going crazy.

The Royals answered with three runs in the 8th on just one hit, a Lorenzo Cain double to the wall. Wade Davis struck out the side in the bottom of the 8th, as he is prone to do.

A brief rain shower drifted across the ballpark in the 9th as the Royals added a run in the top half. A rainbow developed down the right field line, near where we could see the tiniest sliver of Lake Michigan. Royals closer Greg Holland retired the Cubs in order in the 9th, with two strikeouts. 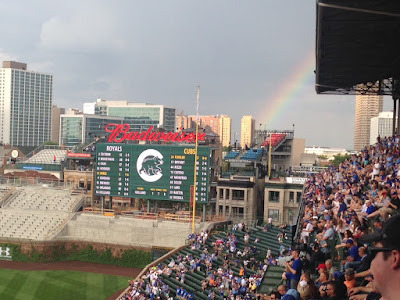 The Royals had won, and the tradition-bound Cubs, as only the Cubs can do, ran up the blue L flag in center field to let everyone know they had lost a baseball game. Abbie and I met up with my brother, Seth, and his wife, Tiffany, for photos with the field. We spilled out into Wrigleyville after the game for pizza.

After two years hosting a Federal League team, the Cubs began playing in Wrigley in 1916. This year is their 100th season playing there. They have, ahem, never clinched a postseason series at Wrigley. Even with much of Wrigley's history coming before baseball's expanded playoffs, that staggers me. The team's last World Series title predates even ancient Wrigley; coming in 1908. The Cubs have lost six World Series at Wrigley, the last of which came in 1945, when a guy who was crazy enough to bring a goat to the World Series supposed cursed the Cubs for not allowed said goat to take in the game. Since then there has been plenty of angst, plenty of lost seasons, plenty of near misses, from the Black Cat Game to the 1984 NLCS collapse vs. the Padres to the Bartman incident, which was just part of a choke job of an 8th inning. The Cubs have come by their Lovable Losers moniker honestly, but Wrigley Field is no loser. Certainly on a perfect late-May day, the old ballpark still puts on quite a show.

Posted by Benjamin Herrold at 4:06 PM No comments: