The night the Royals lost the World Series 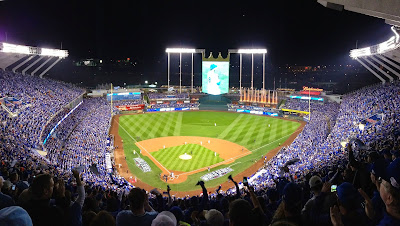 Baseball is a game of slow boiling building to a resounding conclusion, so Game 7s stand out. The season is a marathon of thousands of games and incremental success and living to fight another day. Game 7 is finality, those fairly rare occasions, out of hundreds of thousands of Major League Baseball games, either team can win the game and win the World Series. The winners have climbed as high as you can climb in baseball; the losers wear the defeat for the rest of their lives.

October 29, 2014, was Game 7 at Kauffman Stadium. It took a remarkable series of events just to get here. Derek Jeter homered in his final All-Star Game to help the American League win and secure World Series home field advantage for the AL. If Game 7 had been in San Francisco, I almost certainly would have watched on TV.

As it was, even getting to the game in Kansas City was no easy task. My sister and I spent, ahem, $770.20 each for our top row tickets, bought during Game 6 as the Royals routed the Giants to force Game 7.

But the All-Star Game win was merely the first step. The Royals seemed to be fading then, but they got white hot down the stretch, winning game after game with dramatic home runs, crazy speed on the basepaths, and all manner of soft or ground ball singles.

The Royals rallied three times against the A’s in the Wild Card game, the best game I’ve ever seen in person. Then they annihilated the favored Angels and Orioles, going 8-0 in the postseason en route to the an American League pennant. After a lifetime of rooting for a team that almost always had losing seasons, to call that pennant unexpected is the height of understatement. Unbelievable is better, and yet there it was, like a dream after decades of monotonous failure. I listened to Denny Matthews, broadcaster since the team’s inception in 1969, call the pennant-clinching out.

After a thrilling, back-and-forth series, the Royals and Giants headed to Game 7 tied 3-3. I was at Kauffman for Game 1 with family, and then watched Games 2-6 on TV with friends and family, basically all people who are very special to me. Now it was back to Kauffman for Game 7 with my sister, Abbie. My brother Seth and his wife, Tiffany, had seats in a different area. I was sitting right behind Power Mizzou writer Gabe Dearmond and his son. I once gave Gabe’s dad, Mike, a card at one of his final games covering Mizzou for the Kansas City Star. 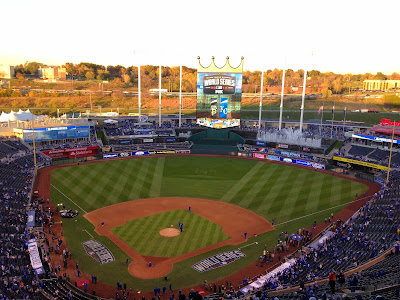 I took pictures of the stadium before the game, and it all glowed with the gold of an autumn evening. The grass hills behind the stadium, across I-70, were a canvass of gold. The weather was perfect, just a hint of crispness so it felt like classic October baseball. The last Game 7 in Kansas City, in 1985, was a party and a rout. Kansas Citians ecstatically counted down the outs until Denny yelled, “No outs to go!” on the radio.

This one would be tighter. The Giants got two in the second. Kansas City answered in the bottom of the second. Alex Gordon doubled home Billy Butler. I screamed, “Run, Billy!” over and over until the not-particularly-fast Butler slid home safely. Gordon later scored on a sac fly. 2-2.

After a scoreless third, Royals manager Ned Yost brought starter Jeremy Guthrie back out for the fourth. Many people wanted him to go to with Kelvin Herrera instead, and go two innings each for Herrara, Wade Davis and Greg Holland, Kansas City’s killer bullpen trio. Game 7s are so weird when it comes to pitching. You expect a patten of pitching management for most games, but with no tomorrow, it’s like a long race where the runners almost immediately break form and begin sprinting for the finish.

The Giants 1-3 hitters would go hitless, and the 6-9 hitters would go 1-for-9. But the middle three of Sandoval, Pence and Belt were a menace, going 7-for-11. In the fourth, Sandoval, dubbed “the Panda,” singled. Guthrie stayed in. Pence, who looks like Marv from Home Alone, singled. Guthrie stayed in. Belt flew out, but Sandoval tagged up and advanced to third. In came Herrera, needing a strikout or a popup to preserve the lead. He got to an 0-2 count on Mike Morse. But Morse singled to left.
3-2.

Herrera got out of the inning with no further damage, but Royals fans will think about that fourth inning for a long time.

With the Giants up one, and Herrera-Davis-Holland essentially shutting down any hope of San Francisco scoring again, the game became all about Kansas City finding a way to score a run. The top of each inning, Royals fans metaphorically held their breath and the remarkable relievers slammed the door on the Giants again and again.

After former Royal Jeremy Affelt threw a scoreless fourth, Giants manager Bruce Bochy went back to his bullpen for a familiar face, Madison Bumgarner, on just two days rest after he shut the Royals down in Game 5.

Bumgarner is one of the greatest pitchers in World Series history, and even in the relatively early spot of the fifth inning, his loping in from the bullpen to pitch was foreboding. The crowd almost gasped. Then, as Kansas City had done all season, the team and fans and city and region steeled itself to somehow get the job done.

The first hitter to face Bumgarner, Omar Infante, singled, and the crowd thundered. But then, beginning with an Alcides Escobar sac bunt, Bumgarner retired the next 14 batters he faced.

Inning after inning the Royals hope waned. The orange glow from the Midwestern sunset faded behind the red-lit Arrowhead Stadium I could see from my seat. A rising crescent moon took its place in the late-October night sky. 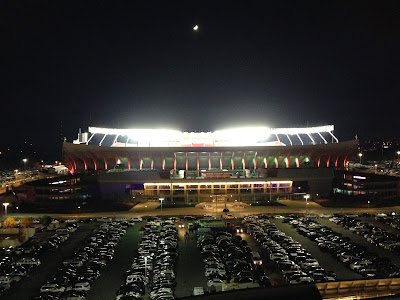 Before the seventh, Royals fans sang “Take Me Out to the Ballgame” during the seventh inning stretch. The 106-year-old song, a staple of the American summer, references a girl with the initials K.C. in its full lyrics. (“Katie Casey was baseball mad…”)

The crowd roared and cheered... and Bumgarner set the Royals down in order. It was getting late.
Before the eighth, Kansas City native Eric Stonestreet appeared on the massive video screen in center field, as his character Cam from “Modern Family,” with the actor who plays Mitch, both wearing Royals hats and encouraging the fans to get loud.

The crowd roared and cheered... and Bumgarner set the Royals down in order. It was becoming one of the most remarkable athletic performances I’d ever seen. Panic and anxiety and hope hung thick over the stadium. 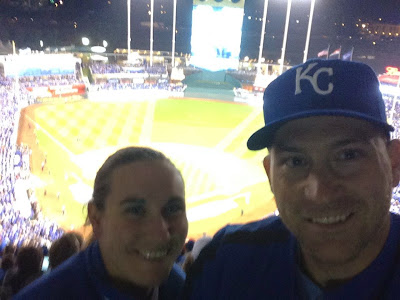 Before the ninth inning, I took a quick picture with my sister, for memory’s sake. I wanted to get it before the final result, so we could still be smiling either way. Royals fans screamed and waved signs and rally towels. Another baseball girl with K.C. initials, St. Louis Cardinals Team Fredbird member Katie Christopher, tweeted, “Hoping for a walk off (blue heart) #Royals #WorldSeriesGame7”

It was as if each inning the team and fans and city and region and even a nation yelled and charged at some great seemingly immovable obstacle, surging ahead with all the hope and courage and might available, only to be beaten back again and again. Yet they kept charging, with the final, frantic push of the night.

Eric Hosmer, who we scarcely dared to dream about batting in the World Series when he was a top prospect and the Royals were awful, struck out. Billy Butler, beloved “Country Breakfast” in his final Royals at bat, popped up to first.

Then... the great immovable obstacle wobbled. Alex Gordon, who grew up in Nebraska and has a brother named Brett in honor of the Royals’ greatest player, dropped in a single. The Royals had life, and then some. The ball skidding past the Giants centerfielder, and Kauffman Stadium erupted as the ball bounded out to the wall. I yelled and jumped with all I had as Gordon raced around the bases. It was a wild, screaming, dizzying few seconds; literally so for me. As Gordon rounded second and headed for third and the massive upper deck seemed to be shaking and I had yelled out all my air, I suddenly felt very light-headed and maybe slumped just a bit. Whatever it was, I’m pretty sure you’re not allowed to faint during the pivotal moment of Game 7 of the World Series, so I managed to stay upright.

Royals third base coach Mike Jirschele held up Gordon at third as the Giants were getting the ball back to the infield. It was almost certainly the right call, as only Bumgarner’s dominance was the only reason to even think about sending Gordon. It would have taken a severely botched play for him to score. Still, the play was rehashed over and over, like I’m doing now, and it won’t be easy to forget.

Salvador Perez battled gamely as Bumgarner kept throwing pitches up. Perez had been hit by a pitch earlier and probably would have come out of any other game. Had he hit a homer, it would have been one of the biggest in baseball history.

He did not homer. Perez popped up in foul territory on the third base side. I effortlessly remember seeing Sandoval move under it and the exact moment I knew the Royals would lose the World Series. Sandoval caught the popup, and the Giants poured out onto the field. Some fans chanted “Let’s go, Royals!” in appreciation for the remarkable season. Many of us just watched the scene in silence. I remarked to my sister we had seen on the other greatest World Series performances with what Bumgarner did. But she summed up the situation: we would have rather seen the Royals win.

Still, the Royals run gave us some great memories: that win over the A’s and my grandma calling me after, long after midnight to tell me she’d stayed up to see it all; sharing the playoff wins with my favorite people on earth; finally getting to experience the postseason; when the Royals won the pennant and I got congratulatory messages from France and Argentina and Iowa and my mom and dad.

The Giants may have the World Series title; well earned, and congratulations to them. But I have some wonderful memories, and the American League pennant, and my baseball team is alive again.
Posted by Benjamin Herrold at 5:21 PM No comments: