Lefty and the U.S. Open 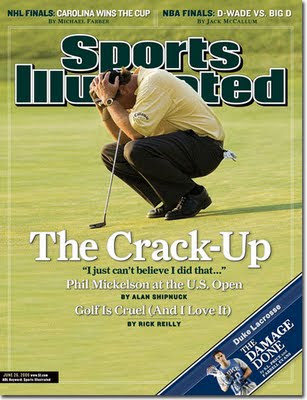 The most compelling figure at the U.S. Open does everything righthanded except one thing, and yet they call him Lefty. That’s because Phil Mickelson’s one wrong-handed activity is swinging a golf club, and he does it pretty well. (He learned to swing mirroring his dad; thus the lefthanded approach.) With Tiger Woods missing the U.S. Open, which starts Thursday at the Congressional Country Club in Maryland, the spotlight is squarely on Phil, who has finished second at the U.S. Open five times, more than any other golfer.

He has never won the U.S. Open.

It’s the tournament that he says he’s dreamed about winning since he was a little boy, and yet he’s lost it so many times in excruciating fashion. We’ll get to that in a bit.

Mickelson has so often been the swashbuckling risk taker, trying ridiculous shots that many couldn’t even visualize. Rick Reilly once wrote that watching Phil was like watching a drunk chase a balloon near a cliff. His shots were spectacular, but the meltdowns were somehow more spectacular, more defining, more indelible. It was like watching NASCAR for the crashes.

Phil finally broke through and won the 2006 Masters, shedding forever that weighty label of “Best Player Never To Win A Major.” His back nine was one of the best ever on a Sunday at Augusta, second only to Jack Nicklaus’ mythical charge in 1986, according to Sports Illustrated. He won the Masters two other times, won a PGA Championship, but has so far not been able to break through in that most American of tournaments, the U.S. Open.

(What about the other major, the British Open? It’s a safe bet Phil will never win that one; the brutal winds clash with his sky-high wedge game, among other issues. He has only one career top-10 at the British, in 2004.)

But now, this week, especially with Tiger out, the golf world will watch to see if Phil can finally capture his white whale, a U.S. Open title. The memories of his near misses will always be just a video clip away, and will likely be played over and over again during the tournament. Here’s the rundown of his five U.S. Open runner-up finishes:

Lost by 1 to Payne Stewart

Phil was locked in a duel with Stewart, who died four months later in a plane crash, a reminder of what a truly tragic figure is. Phil took a one-stroke lead to the par-4 16th, but then bogeyed that hole. Stewart buried a 25-footer for par to tie it. The par-3 17th was a thrill, with both golfers sticking their tee shots within 10 feet of the cup. Phil missed his eight-footer, Stewart made his three-footer for a one-stroke lead. Stewart then buried a 15-foot par putt on 18 to seal the win. His fist out, back leg up victory pose is a statue now.

Lost by 3 to Tiger Woods

This was back when Tiger was throttling the golf world, with this win, Tiger had won six out of nine majors. But Phil birdied the par-5 13th on Sunday to get within two of Tiger. But a bogey on 16 did him in, and Tiger cruised despite bogeying two of the last three holes.

Lost by 2 to Retief Goosen

After Phil birdied the par-4 16th to take the lead with two holes to go, another par-3 17th did him in. His tee shot went into a bunker. His shot out of the sand stayed eight feet above the hole. His par bid missed the cup and just kept rolling, six feet past. He missed the comebacker. The double-bogey ended his bid to finally win the U.S. Open.

Lost by 1 to Geoff Ogilvy

Oh, Phil at Winged Foot. This one was an absolute nightmare, the worst meltdown of them all for Phil. He went to the 18th and final hole needed a par 4 to win, bogey for a playoff. He had scrambled all day, hitting a mere two fairways all day, but he was still in great shape. With thousands of fans silently screaming “No!” Phil hit driver off the tee, driving his shot off a hospitality tent. He then tried to cut a three-iron around a tree (another of his bold, creative shot ideas) but it bounced off the tree’s trunk and rolled back at him. His third shot went into a bunker. From an awful bunker lie, Phil’s chip trickled off of the green. His chip for bogey and a playoff didn’t come close.

Afterward, a befuddled, red-eyed Phil gave this classic quote: “I can’t believe I just did that. I am such an idiot. I can’t believe I couldn’t par the last hole.” He was on the cover of Sports Illustrated that week, crouched in agony (see above).

Phil has had his share of narrow losses, but this was easily the most awful. “I’ve never seen him like this,” his wife, Amy, said in a hushed tone afterward.

Lost by 2 to Lucas Glover

Playing on a Monday after rain pushed back the tournament’s conclusion, Phil birdied 12 and eagled 13 to grab the lead. However, a three-putt bogey on 15 hurt his cause. Then another par-3 17th cropped up, which Phil bogeyed. This, coupled with Glover’s only birdie of the day on 16, sealed the deal.

I’ve never especially rooted for Phil to win, but this week, I think I want him to win the U.S. Open. I’ve enjoyed the theater of how many times he’s come so close, but I just like to see athletes break through, especially late in their careers after coming up just short so many times.

Phil seems like a good guy. He actually smiles on the golf course, like a man getting paid (a lot) to play golf should. He seems to have his priorities in order. He left the tour for a while when his wife, Amy, had breast cancer. He took a five-week “paternity leave” to enjoy the birth of his daughter Sophia. He was derided somewhat by his tour peers (“Did Phil have the baby?”), but Mickelson knew even then that spending time with your newborn daughter just might be more important than playing in the Buick Challenge in October.

Phil’s already wealthy, and he seems to have a great, fulfilling family life. But professional athletes play to win. The competitor in him, the kid in him, desperately want to win his beloved U.S. Open. He turns 41 on Thursday, the day of the tournament’s first round. Time is no longer on his side.

I’m hoping he does well. He’ll almost surely have thunderous support. But should he be at or near the lead in the final round on Sunday, I’ll be… well, I’ll be expecting great theater.

Posted by Benjamin Herrold at 7:01 PM