The Chiefs in the Playoffs 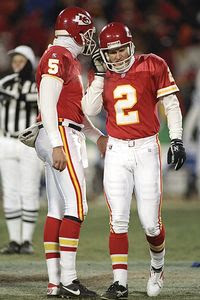 As many people already know, the Chiefs have lost six straight playoff games dating back to January 23, 1994, my seventh birthday. It’s been quite a run, as the Chiefs have won a lot of regular season games during this time and have had some very good teams. So often they have lost in crushing fashion. Of the six games, three were on the road and three were at home, including two losses as the No. 1 seed.

And without further adieu, here is the Chiefs’ postseason experience since that long-ago playoff win in January 1994.

The Chiefs came into the playoffs as the No. 3 seed in the AFC, 1993 champions of the West Division behind legendary quarterback Joe Montana. They won a thrilling 27-24 overtime game against the Steelers at Arrowhead Stadium.

In the Divisional round, on January 16, 1994, the Chiefs won 28-20 on the road against the Houston Oilers in the Astrodome. The Oilers team no longer exists. Nobody plays in the Astrodome. It was Albert Pujols’ 14th birthday (probably). The Chiefs were a strong team, would be one of the winningest teams of the 90s. Surely no one thought this would be the team’s last playoff win for nearly two decades (and counting).

In the AFC Championship game, Kansas City lost 30-13 by a tremendous Bills team that was winning its fourth straight AFC title game. The Chiefs only trailed 20-13 heading into the fourth quarter, but the Bills closed it out with 10 unanswered points. For Chiefs coach Marty Schottenheimer, “destiny’s orphan,” to borrow from Rick Reilly, it was his third loss in three AFC title games. More on Marty in a bit.

The Chiefs earned a Wild Card berth during the 1994 season, slipping in as the sixth and final seed in the AFC. They were tied at 17 at the half, but then things fell apart.

Miami scored 10 unanswered points in the third for a 27-17 lead. But the Chiefs had Montana, the King of the Comeback Drive, the man who pointed out John Candy in the stands before leading a Super-Bowl winning drive.

But on this day, he threw a pick at the goal line in the fourth quarter. Another aging legend, running back Marcus Allen, fumbled for Kansas City at the Miami 34 with 7:31 to play. There was no comeback. Montana did finish his final game with 314 passing yards and two touchdowns.

Schottenheimer is the NFL’s sixth-winningest coach, yet he is clearly known for his playoff failures. He is 200-126-1 in the regular season, but his 5-13 playoff record isn’t the elephant in the corner of the room, it is the room. I think his 200 wins will get him in the Hall of Fame some day, but because he never reached a Super Bowl, he’ll never be considered one of the NFL’s greatest coaches.

But he never had that franchise quarterback that almost all great coaches seem to have. It can’t be proven, but there’s a reasonable argument that Schottenheimer is a Brady away from being Belichick, an Otto Graham from being Paul Brown, a Roger Staubach from being Tom Landry. Or maybe not. But we’ll never know. He had two years of a fading Joe Montana and a parade of anonymous, middling-at-best quarterbacks. Still, Schottenheimer almost rode a ferocious defense, running game and his “Martyball” conservative style to the Super Bowl.

Schottenheimer’s 1995 Chiefs team was arguably his best. The stout defense was led by Derrick Thomas, Neil Smith and Dale Carter in their primes. The Arrowhead crowd was perhaps the loudest in the NFL, and the Chiefs went 8-0 at home. Kansas City won the division at 13-3 and earned home field advantage throughout the playoffs. They seemed invincible at home. This was the year.

The first round playoff game opponent was the Indianapolis Colts and quarterback Jim Harbaugh, who coached Stanford in the Orange Bowl Monday night. It was a brutally cold game. I’ve found the temperature at kickoff listed anywhere from 0 to 14 degrees, and it surely dropped as the game progressed, given the 3 p.m. start. It had snowed a lot the day before. Wind chills were below zero. It was cold. If you’ve seen Arrowhead, you know what makes it so loud, the massive, steep three decks of seats, also keeps the stadium grass from getting any sun late in the season. The field was simply a frozen, shredded, torn up mess.

The Chiefs took an early 7-0 lead and things looked bright. Then, as the sun began to sink, things started to go awry. The Colts tied the game with a second-quarter touchdown. Kicker Lin Elliott missed a 35-yard field goal wide right. Elliott later said it “was like kicking off your garage floor.” The conditions were tough, but even worse Elliott began thinking of everything but actually kicking. He though about the torn up sod, how the cold made the ball rock-like, the weight of the moment and a hungry, almost desperate fan base.

At 7-7, the stage was set for a cataclysmic second half. In the third, Colts kicker Cary Blanchard thumped home a 30-yarder for a 10-7 Colts lead.

Elliott’s “Ice Cold Nightmare,” as an ESPN story would later call it, continued. He missed a 39-yarder to open the fourth quarter.

Meanwhile, Chiefs quarterback Steve Bono was simply horrendous. In the game, he completed 11 of 25 passes for 122 yards, one touchdown and three backbreaking interceptions. One pick set up the Colts’ go-ahead field goal.

Finally, with four minutes left, a desperate Schottenheimer put in backup Rich Gannon, who completed 5 of 8 passes for 30 yards in the biting cold to get the Chiefs in position for the tying field goal. Gannon converted three third downs on the drive, including a 14-yard scramble to get Kansas City to the 25-yard line. (He narrowly missed Lake Dawson in the end zone on third down.)

Alas, Elliott missed for the third time, yanking the 42-yarder wide left with about 42 seconds to go, ending the three-hour horror movie. It was a stunning upset, a wild card dome team winning in the frozen fortress that was Arrowhead in Winter. There were jokes about Elliott trying to commit suicide after the game but being unable to kick the chair out from under himself to complete the hanging. The amount of Internet venom directed at Elliott is staggering. He is hands-down the most reviled Chief of all-time. And in the opinion of many, Jan. 6, 1996, was the darkest day in Chiefs history.

When it wasn’t Elliot and Bono stabbing Marty in the back in the playoffs, it was John Elway. In January 1987 and January 1988, Elway’s Bronco teams beat Schottenheimer’s Browns in the AFC Championship Game. The 1987 game in Cleveland featured “The Drive,” when Elway led his team on a 98-yard, 15-play drive for the ages to tie the game with 37 seconds to go. (SI’s Rick Telander: “Elway didn’t just pull victory from the Browns’ mouth. He ripped the thing from halfway down their throat.”) Denver won in overtime. The 1988 game in Denver featured poor Ernest Byner fumbling at the Denver three-yard line with the Browns down seven.

Now the Chiefs were again the No. 1 seed in the AFC. And the Broncos came into town with Marty’s old nemesis at the helm. Elway was still hunting his first Super Bowl, an aging veteran wondering if it was ever going to happen.

Early in the game, Denver had to change uniforms for having some sort of slick substance on them. They said it was for warmth; the Chiefs said it was designed to make them slick and tougher to block and tackle.

Denver took a 7-0 lead into halftime, but the Chiefs put up 10 unanswered points in the third to take a narrow lead into the fourth quarter.

But John Elway made a career of erasing fourth-quarter leads, and with Terrell Davis rushing for over 100 yards, the Broncos went ahead with a fourth-quarter Davis touchdown run. For a third time, Elway and Co. yanked it away from Marty and Co.

Down four with two minutes to go, Chiefs quarterback Elvis Grbac frantically tried to lead a two-minute drill. The defining image of the drive may have been Grbac with his hands covering his helmet earholes, trying to get the next play, clearly flustered. The unsettled offense got deep into Bronco territory, but then with 19 seconds to go Grbac’s fourth-down pass to Lake Dawson sailed well out of the end zone. Elway would win the first of back-to-back Super Bowls that year, and Schottenheimer would never again coach a playoff game for the Chiefs.

The Chiefs had a sensational offense in 2003, with quarterback Trent Green, running back Priest Holmes, tight end Tony Gonzalez and an outstanding offensive line.

The team roared to a 9-0 start (just like the Royals did that same year) and finished 13-3, winning the AFC West. The Chiefs were the No. 2 seed, getting a bye and a home game with Peyton Manning and the Colts in the divisional round of the playoffs.

The problem, of course, is that the Chiefs defense was simply awful. So many games that year turned into old AFL-style shootouts.

And in this game, the Chiefs did not force Manning and the Colts to punt. Not once. A Holmes fumble near the start of the second half doomed the Chiefs. They hadn’t held serve on that one possession. They couldn’t stop Indy. It was over.

After the game, defensive coordinator Greg Robinson resigned in disgrace.

Chiefs defensive end Eric Hicks: “(Manning) is the master. That was an amazing performance… they took us to the woodshed and just beat us. It was embarrassing.”

This one wasn’t even close. The Chiefs slipped into the playoffs as the No. 6 seed, with Herm Edwards coaching the shell of Dick Vermeil’s fine offense. Indianapolis took a 9-0 halftime lead as Kansas City failed to get a first down until the third quarter. A Chiefs touchdown briefly made it 16-8 and gave the auspice that this was a football game, but the Colts put it away with another touchdown.

Indy outgained Kansas City in total yards 435-126. They had 28 first downs to the Chiefs’ seven. It lacked the audacity of the 2003-04 playoff game, but it was a methodical, dominating step by the Colts en route to a Super Bowl win. It launched Kansas City into a desert of awful seasons from which is is just now escaping.

And now we have Chiefs-Ravens at Arrowhead on Saturday. Baltimore is a slight favorite, but Kansas City can win this game. As you can see above, they need this game. Either way, the Chiefs' recent playoff history indicates it should be great theater.

Posted by Benjamin Herrold at 8:14 PM