An ode to Trenton 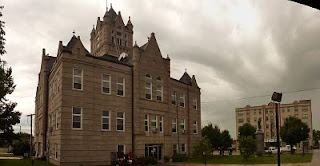 Last Sunday night as I was driving through Trenton to my grandparents' house for a Christmas gathering, I got to talking with my sister about the town. It was hard to explain, but as we drove down a street I'd gone done so many times before, as the town glowed after dark with Christmas decorations, I realized there was a quality to Trenton that I enjoy quite a bit. My hometown is Gilman City, and I live in Columbia, which has its own charms, but there is a certain catchiness to Trenton, a town I have plenty of ties to.
Trenton is covered with snow in the winter and smothered with humidity in the summer. It's spring floods in the Thompson River bottom and dry spells and some of the bluest sky you ever saw in the fall.
Trenton is that wonderful Grundy County Courthouse, particularly when viewed coming into town from the west on Highway 6, with all those spires, looking like a European castle. It's the Hyde Mansion, a tasteful, dignified, North-Missouri-sized mansion. It's the Adams Middle School and Trenton Foods and the Rock Building.
Trenton is the patchwork hub of Five Points, starting point for so many directions. It's the learning and potential of North Central Missouri College, the Rock Island Line (she's a mighty good road), and Trenton Lake, that ever-changing canvass of the seasons.
Trenton is Leonard and Andy Hill and so many great people. It's the Republican-Times, the chronicle of Grundy County, and my brother's great game previews. It's KTTN and 101.7 and slowly getting the signal when I'm getting close to home.
Trenton is, maybe as much as anything, the packed bleachers at C.F. Russell Stadium, the band playing the fight song, cheerleaders dancing, and a flash of black and gold down the green field. It's Jesse Owens racing a horse, the Sugar Bucket, NCMC Holiday Hoops, the Bluejays hitting a baseball back toward the fence at Burleigh Grimes Field, and Amber Vandevender pulling up on a fast break and burying a three.
Trenton is kids driving around listening to Waylon Jennings on the radio and kids driving around listening to Metallica on tape and kids driving around listening to Garth Brooks on CD and kids driving around listening to the lovely Katy Perry on their iPods. And much of that driving is up and down Ninth Street.
Trenton is plenty of nostalgia and memories. It's where so many farmers from the surrounding farming empire go to retire and share stories. It's a town where people love to talk about all that's happened and how things were. But it's also a town with hope and a fascinating future, hope annually visible in, among other things, the new crops in the fields and the new crops of graduating seniors. And in NCMC's and the hospital's projects. And in the dreams and ambitions and hearts of its people.
Nearly 24 years ago, I was born in Trenton's Wright Memorial Hospital. And Trenton is a pretty good place to start.
(courthouse photo by americasroof)
Posted by Benjamin Herrold at 7:34 PM